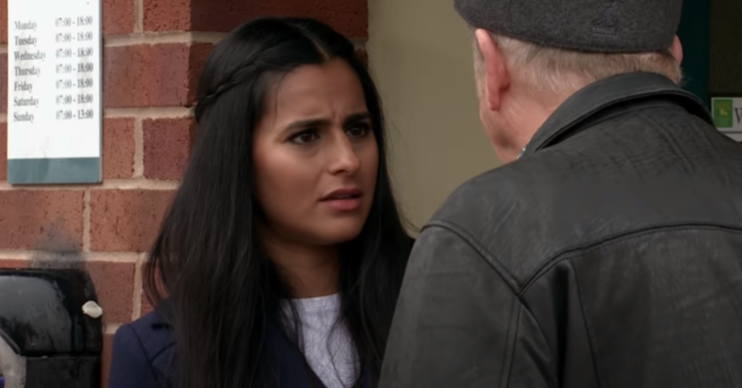 Coronation Street SPOILERS: Geoff to kill Alya as she tries to expose him?

Alya refuses to let Geoff get away with what he's done!

Coronation Street character Geoff Metcalfe is set to return to the cobbles after his stay in hospital. But will he try to get revenge on Alya as she’s determined to expose him for the abuser he is?

Geoff has been in hospital after his wife Yasmeen stabbed him in the neck in self-defence. While he’s been recovering, Yasmeen is in prison facing an attempted murder charge.

But Alya is determined to make people see what Geoff is really like.

In Friday’s episode (May 29) Alya pays her gran a visit in prison and assures her she knows that Geoff abused her. But Yasmeen refuses to discuss it and hurries out.

Meanwhile, Tim collects his dad from the hospital and drives him back to the Street. When he gets to No.6, he goes to put his key in the door but realises it won’t work.

Alya announces she’s changed the locks. While Tim is furious, Geoff checks the security feed on his phone.

Viewers have seen Geoff lose his temper with Alya once before. Now she’s trying to foil his plans to look like the abuse victim, will he go to extreme lengths to shut her up?

Viewers who have been following Geoff and Yasmeen’s coercive control storyline know Alya was the first to clock on to Geoff’s behaviour.

After investigating his past, she not only discovered that he was arrested for affray, but that he has a nasty temper.

But despite begging Yasmeen to leave her abusive husband, the Speed Daal chef refused.

Things soon escalated when Geoff threatened to kill his wife and she ended up smashing a wine bottle over his head and stabbing him in the neck.

Does he have it in him to follow through his threat to kill – and will Alya be his victim?

Do you think Geoff would kill Alya? Leave us a comment on our Facebook page @EntertainmentDailyFix and let us know what you think of this story.