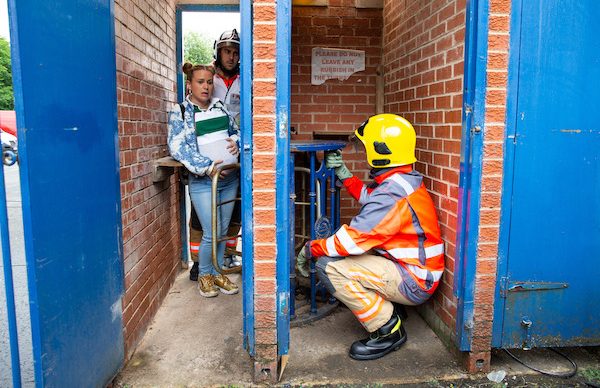 Her bump leaves her red-faced

Weatherfield’s Gemma Winter is left red-faced in next week’s Coronation Street when a baby drama leads her to become front page news in the local paper.

She’s only got a few weeks to go before her quads arrive, and Gemma is certainly feeling the strain of carrying four babies.

Gemma and Chesney are still trying to get their heads around the fact that they will have four babies on their hands in the not too distant future, and the pregnancy hasn’t come without its dramas.

The pair were shocked when the doctor recently revealed that one of the four babies was much smaller than the others, and they would now need weekly scans to make sure all is okay ahead of the birth.

However, Gemma finds herself back in hospital sooner than planned next week when she gets stuck in a turnstile at a football match.

The mum-to-be is thrilled when she manages to wangle some VIP tickets to the latest Weatherfield County match, and she and Chesney head off to make the most of having a day out without the babies in tow for one of the last few times.

However, Gemma’s joy turns to horror when her bump gets stuck in the turnstile as she arrives at the football grounds.

Gemma is left mortified when the fire brigade has to be called and they end up dismantling the turnstile so that they can get her out.

The future parents head to the hospital for Gemma to be checked over, but things only get worse for the embarrassed expectant mum when she realises a photo of her stuck in the turnstiles is splashed all over the front page of the Weatherfield Gazette.

Gemma soon becomes a local celebrity and starts getting hounded by the press… and she decides to get some advice from a PR agent.

In the Rovers the agent insists she could set her up with interviews that would make Gemma a fortune, and with four hungry mouths to soon feed, the news is like music to Gemma’s ears.

And it seems she might need the cash sooner rather than later when Gemma starts getting stomach pains, leaving everyone panicking that the babies are imminent.

Gemma soon finds herself back at the hospital where she is told she needs to take things easy from now on, and she is put under strict orders to get plenty of rest.

However, Bernie has got wind of the fact there is money to be made and with pound signs in her eyes she tells Gemma to ditch her new agent and offers to do Gemma’s PR herself.

Gemma is thrilled by the idea, but Chesney’s clearly not sure.

Is Bernie’s meddling about to lead to heavily pregnant Gemma taking on more than she should?

Are you looking forward to Gemma’s babies arriving? Leave us a comment on our Facebook page @EntertainmentDailyFix and let us know what you think!