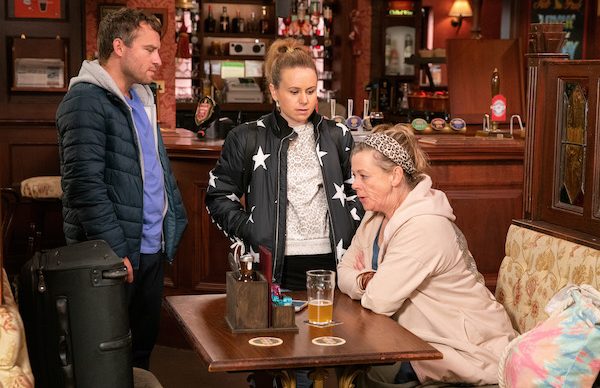 Paul's sexual abuse is finally out in the open

Next week’s Coronation Street sees Gemma and Bernie Winter discover the shocking truth that Paul Foreman was groomed and abused as a child by Kel Hinchley.

Until now Gemma and Bernie have been kept in the dark about Kel’s abuse of Paul when he was a child… with both putting the men’s estranged relationship down to Paul’s moody ways.

But next week the pair are set to discover how Kel groomed Paul right under their noses.

Paul starts to try and face the future next week, and after speaking to David about how he has moved forward since Josh raped him last year, Paul decides he needs to look forward instead of backwards and focuses on his relationship with Billy.

The pair have been getting closer recently, with Paul confiding in Billy about the abuse he suffered at the hands of Kel when he was a child.

And when Billy gives Bernie a job cleaning the church, it seems he really is trying to help Paul and his family.

Paul is perplexed when he finds out Billy has given his mum a job, and when he confronts the vicar, he confesses to Paul that the reason he gave Bernie a job is because he is in love with him.

Paul is thrilled to hear Billy declare his love, and decides to cook a romantic meal for Billy to show him that the feeling is mutual.

Paul assures Billy that he wants him in his life and intends to do everything he can to make him proud, and it is a real turning point for him as he looks forward to his future for the first time.

But just when it seems everything is going well for Paul, his past comes back to haunt him in a big way when Kel’s abuse is uncovered by Bernie and Gemma.

The truth comes out when a spate of robberies start at the church on the same day that Bernie starts her new job, and the finger of suspsisioon is quickly pointed at her.

Gemma and Paul are fuming with their mum, especially when they find a bag of stolen goods under the stairs at number 5.

But Bernie is adamant that she’s innocent, and it soon becomes clear that Kel is the one to blame. Gemma and Bernie decide to take drastic action and they break into Kel’s flat and are horrified to find a stack of incriminating items.

Not only is Daniel’s stolen laptop amongst the things Kel has stashed at his flat, but there is also a stack of old photos of Paul, and some of other children that they don’t know.

Gemma is horrified as the penny drops and she realises the significance of Kel having these pictures of her brother, and the pair take everything home with them.

Paul is sickened when his mum and sister come back with the laptop and photos, and once again his terrible past is laid out before him.

An emotional Paul manages to tell Gemma and Bernie the truth, opening up about his childhood experiences with Kel, and how he admired Kel, but ultimately he sexually absused and groomed him.

Gemma and Kel are shocked to the core as they realise all this went on right under their noses… and Billy’s heart breaks for Paul as he talks about what happened to him as a child.

Gemma is adamant they have to go to the police, but Paul insistent that he doesn’t want to rake up everything again, telling his sister it would be too painful to go through.

Will Gemma and Bernie get their own justice against Kel? And will opening up to his family about what happened lead to Paul being able to more forward with his life at last?

Do you want to see Bernie get revenge on Kel? Leave us a comment on our Facebook page @EntertainmentDailyFix and let us know what you think!