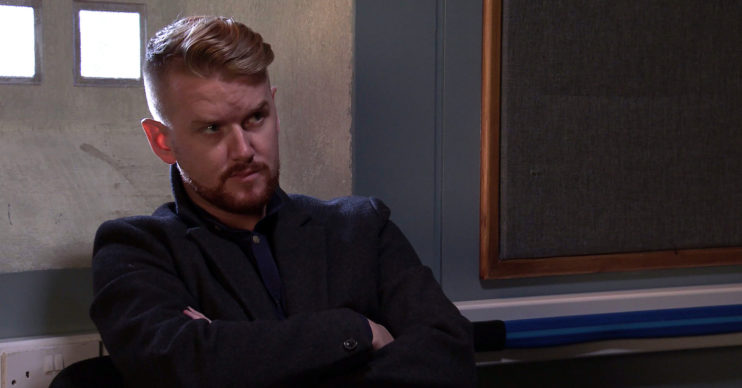 Coronation Street SPOILERS: Gary Windass is questioned by the police

All eyes are on Gary after Sarah's phone call...

It’s not looking for good for Gary Windass at Coronation Street. As the police zoom in on him, his murderous secret is set to be exposed over Christmas…

Gary Windass is set to be questioned by police on Coronation Street.

After Sarah Platt anonymously tells Crimestoppers she knows where a body is buried, Gary becomes their key suspect.

Why is Gary called in for questioning?

But can the police get Gary to break his cover story? Pulled into questioning from the salon flat, an already suspicious Maria is visibly shaken.

Down at the station, the police intensely question Gary. They even tell him that they reckon Rick’s body is buried in the woods.

While Gary is clearly annoyed to be there, he doesn’t budge in letting anything slip.

He says he has no idea what they’re talking about, and certainly doesn’t know where Rick is.

Frustrated, the police are forced to let him go due to lack of evidence.

Back on Coronation Street, he furiously confronts Sarah at the salon.

What does Maria overhear from Gary and Sarah?

They end up discussing Rick’s murder.

Shouting at him, Sarah says Gary only moved Rick’s body to cover his own tracks.

However, Gary hits back and says Sarah is doing the exact same thing now.

But their private conversation is secretly overheard by Maria.

As she spies on the pair, Sarah says that Gary is the one that killed Rick.

Now enraged herself, she asks him why Sarah is so convinced he’s a murderer.

Unable to convince her he’s otherwise, she throws her husband out of the house.

Before threatening to call the police on him herself.

On Christmas Eve, Gary is forced to spend the night in the furniture shop.

Meanwhile a concerned Kelly Neelan asks if he’s heard from Rick – after she receives a Christmas card from her dad.

Insisting he hasn’t, he then goes on to try and make amends with Maria.

Will he patch up things with Maria? Or will she stick to her word and phone the police?

Let us know your Corrie spoiler predictions on our Facebook page @EntertainmentDailyFix.