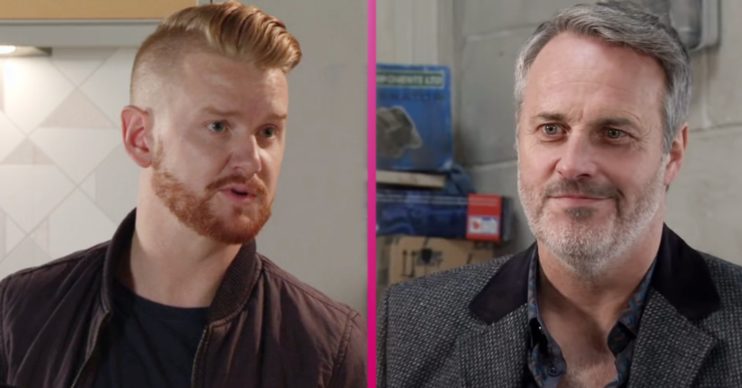 In next week’s scenes Maria makes plans to buy the barbers from Audrey. But she’s shocked to discover a huge credit card bill and accuses Gary of hiding it from her.

Meanwhile, Gary tells Fiz he’s going to have to cut her hours at the furniture shop.

Having heard their conversation, Ray tells Gary he’s got a business proposition for him.

The businessman reveals he’s like to buy the factory and offers Gary £150k. Gary’s adamant that it’s not for sale but Ray tells him to have a think about it.

Maria urges Gary to accept Ray’s offer as it would mean she could buy the barber shop.

But Kevin is forced to admit he no longer owns the premises and had to sell to Ray.

Surveying the sinkhole in David’s garden, Gary offers to out him in touch with a specialist company. However when David lets slip that Ray offered to buy the house, Gary’s mind is a whir.

At the Bistro, Gary tells Ray to double his offer and they’ve got a deal.

Having left ray to sweat, Gary tells him that whatever is game is, he’s not playing ball and the factory is not for sale.

Ray ups his offer once again to £400k. As Maria puts pressure on Gary to accept. Will he agree?

Later, Gary ends up getting caught up in Todd’s trouble.

Mick Costello and one of his sidekicks turn up at the furniture shop and threaten Gary, believing he’s in cahoots with Todd.

As Mick makes his getaway, they almost run over Gail who furiously takes a picture of the registration plate.

Maria’s horrified to find Gary battered and bleeding in the shop and forces him to tell Craig everything.