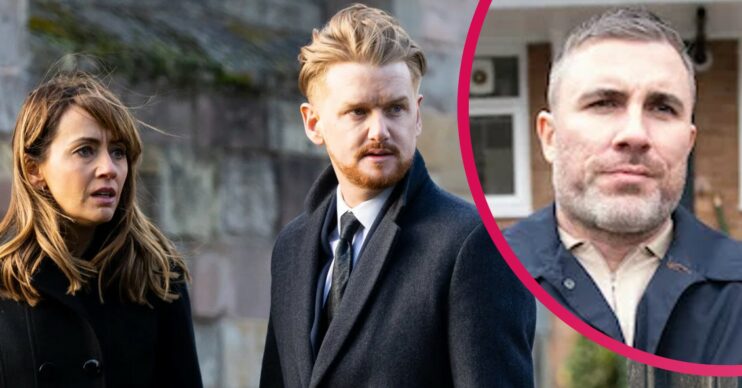 His temper flares once again

Gary Windass in Coronation Street will see his anger get the better of him next week when he lashes out at Rick‘s funeral.

New spoilers reveal Gary gets into a violent altercation with a man over Rick’s coffin.

But could it cost Maria her career?

Read more: Who is in the cast of The Split season three?

Kelly is struggling to come to terms with the death of both of her parents. She gets a shock when she finds out she stands to inherit everything from Rick.

She asks Gary to go and check on the family home for her, and he’s faced with a photo of a smiling Rick, which chills him to the bone.

Gary packs some things up and takes them to Kelly. However, the memories become too much and she runs away.

Alone in Victoria Garden, Kelly takes out her mum’s bottle of morphine. Just as she unscrews the cap, Abi walks by and stops her.

Meanwhile, with Rick’s funeral looming, Maria decides she probably shouldn’t attend. She doesn’t believe it’s good for her image on the council to go to the funeral of a known criminal.

Gary is furious that she would put her reputation over helping Kelly and tells Maria she needs to put their ward first.

Maria changes her mind, but she could live to regret it…

At the funeral, Maria, Gary and Kelly try to put the sins of the past behind them.

Gary lashes out in Coronation Street

Gary is nervous, hoping none of Rick’s old associates are going to turn up.

As they gather at the graveside, a man arrives and spits on the coffin. He tells Kelly he hopes Rick rots in hell.

Gary snaps and lashes out. Maria tries to hold him back, but Gary punches the man and sends him packing.

No one notices a photographer is lurking in the bushes.

Or could the photographer have another motive?