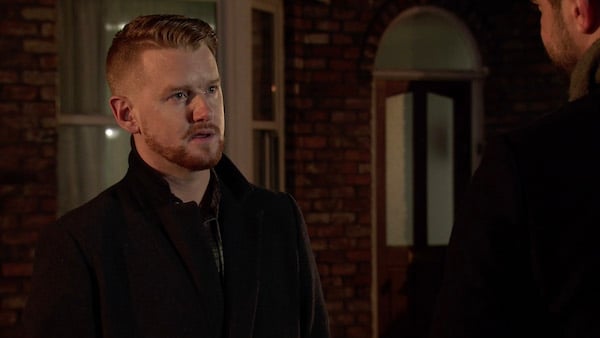 The battle over Maria continues...

There’s drama heading for Coronation Street next week when Ali Neeson is left fighting for his life thanks to a sinister revenge plan by Gary Windass.

It’s no secret that there’s little love lost between Gary and Ali, but as the pair continue their fight over Maria Connor next week, things take a sinister turn when Ali ends up in hospital.

The trouble starts when Gary’s former work acquaintance, Sharon, arrives at the furniture shop to pick up an old client list of Rick’s.

But while Gary might be resisting the temptation to get back into the loan shark business in a bid to make things work with Maria, he asks Sharon for a favour in return for the list – he wants her to teach Ali a lesson for sleeping with Maria.

Things soon take a sinister turn when Ali later collapses at work and he is rushed to hospital as Toyah reveals it looks like he has taken an overdose of diazepam.

Maria looks on in horror as Ali is put into the back of an ambulance, but when Gary joins her he fakes his shock, clearly knowing more about what has happened to Gary than he is letting on.

As Maria races to the hospital to get an update on Ali, Gary panics and calls Sharon, telling her that if Ali dies then she will be to blame.

Ryan is by Ali’s bedside as he recovers from his overdose, and he’s not happy when Maria walks in demanding answers on Ali’s condition.

Ryan blames Maria for playing Ali and Gary off against one another, leaving her shocked.

But there is more drama when Ali regains consciousness and is adamant that he hasn’t taken an overdose and blames Gary for trying to kill him.

Ryan thinks Ali is in denial, but Ali is adamant that he didn’t take anything and promises to prove it.

Later, when Maria sees Ali in his car, she climbs into the passenger seat and is shocked when he reveals Gary must have spiked his drink.

Maria gets scared when Ali locks the doors and starts to drive erratically, desperate to make Maria see that Gary is bad news.

Eventually Maria makes her escape and heads home to Gary, who covers his guilt.

But when Gary and Ali later come face-to-face in the street, the pair square up as Gary warns Ali to stay away from Maria.

With Gary managing to convince Maria that Ali is unhinged, Ali decides there is nothing left for him in Weatherfield and tells Ryan he is leaving.

Realising that he can’t sit around and watch Maria throw her life away with Gary, Ali bids an emotional farewell to Ryan and makes his exit.

But how long will it take Maria to realise that Ali is right and Gary is trouble?

Will you be sad to see Ali leave? Leave us a comment on our Facebook page @EntertainmentDailyFix and let us know what you think!