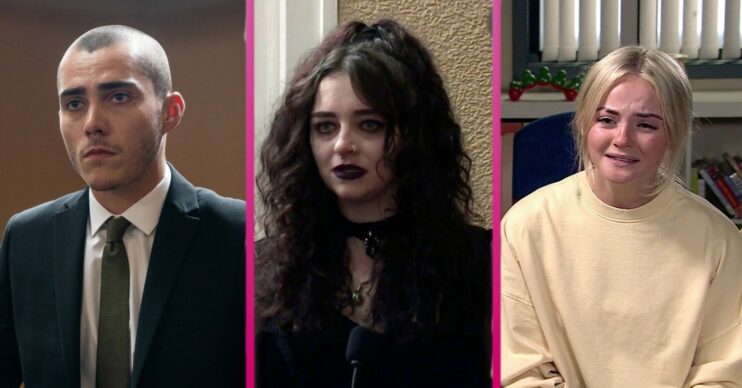 It's going to be a shocking watch

Ever since the horrific hate crime, traumatised Nina hasn’t been able to piece the night together.

There’s no definitive evidence to prove whether Corey or Kelly took Seb’s life without her recollections.

However, on the eve of the trial, a song triggers Nina’s memory, and she goes on a journey of discovery.

Will she finally recall the vital evidence she needs to bring Seb’s killer to justice?

It’s been a hellish time for Nina, who is desperate to remember the truth of the attack.

So, when she hears a piece of music that triggers her memory, she’s caught by surprise.

Read more: Seb Franklin in Coronation Street: Who was he? How and when did he die – and who killed him?

When Seb’s mum Abi finds out, she rushes around with the bag of items given to her by the police.

These were the belongings that Seb had on him that night, and Abi hopes that might prompt Nina to remember more.

When she picks up the plastic heart ring that her lost love gave her, Nina finds another piece of the puzzle in her mind.

Determined to delve deeper, Nina asks Asha and Summer to go with her as she retraces the steps she and Seb took that fateful night.

At the wasteland, Nina remembers them bumping into the gang led by Corey and starts to get clarity.

Distraught, Nina’s mind finally unlocks the truth about what happened and whether Corey or Kelly was responsible.

It’s a horrifying experience, but now Nina has what she needs to ensure justice is done.

Nina soon goes to the police to give a new statement, and Corey’s barrister Sabeen is concerned.

Coronation Street Spoilers also show that the trial begins next week as Corey and Kelly take the stand.

With so much to lose, neither side is willing to give an inch – but Nina’s new testimony changes everything.

Tensions are running high as the main players face off in the courtroom while raging Abi lets rip at Corey’s dad Stefan.

Meanwhile, Roy implores Nina to attend the trial in her full Goth clothes, hair and makeup.

He wants her to be who she really is, not a broken woman scared to show the world her true self.

But as the court case gets underway, twists and turns will shake everyone to their core.

Nina tells the court how she remembered seeing Corey kick Seb repeatedly and Kelly begging him to stop.

However when Sabeen cross examines her, will Nina’s story stand up?

Who will be found guilty of the murder of Seb Franklin?