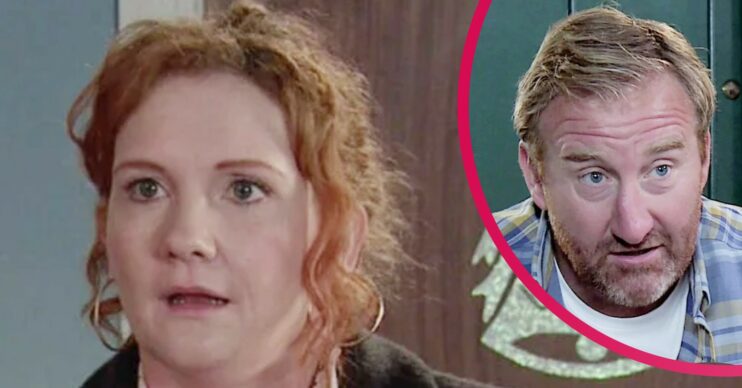 She hasn't been completely honest with Phill

Coronation Street spoilers for next week reveal Fiz hasn’t been completely honest with Phill and it’s about to come back to bite her.

With fans convinced too-good-to-be-true Phill is hiding a dark secret, it’s actually Fiz who has been economical with the truth.

As her Corrie past is exposed, how will Phill react? And what is he really hiding?

Read more: Coronation Street is bringing back lots of past faces this year!

After moving away from the cobbles with boyfriend Phill, it’s clear Fiz isn’t loving her new life.

She’s got a long commute to work and back and isn’t around her familiar neighbours every day. But she’s making the best of it and trying to be positive.

Even though it’s also clear there’s still a spark between her and ex Tyrone, Fiz is throwing herself into her relationship with Phill.

And next week the pair go for a meal with some of his friends.

Graham and Angela seem perfectly nice, but then Graham recognises Fiz from her trial. Even worse, it turns out he was the solicitor for the prosecution…

Why did Fiz go to prison?

Fans will remember Fiz’s husband, John Stape, was a serial killer. In the midst of all his murders, he also assumed the identity of an old friend, Colin Fishwick.

When John had a breakdown and went to hospital, single mum Fiz was stunned to learn ‘Colin’ had inherited money from his mum.

Fiz accepted the money as she was struggling financially, but she ended up on trial for fraud and murdering Colin!

Fiz was released from prison when John was eventually found out.

It turns out, however, that Fiz hasn’t been entirely honest about her past with Phill. Or, in fact, honest at all.

She confides in Tyrone she has never told Phill anything about her prison stint, nor her murderous ex-husband for fear she’d scare him off.

How will Phill react now her lies have been revealed?

Is this the end for them? And is it time for Ty to make his move?

What is Phill hiding?

It seems, however, that Phill is also hiding something.

Viewers have long suspected Phill isn’t all he’s cracked up to be, but clues to just what he’s hiding are few and far between.

Next week Tyrone spots him having a suspicious exchange with a man in Victoria Garden. It’s made all-the-more mysterious by the fact Phill is supposed to be in Leeds at the time.

Just what is Phill hiding? And who will find out the truth?