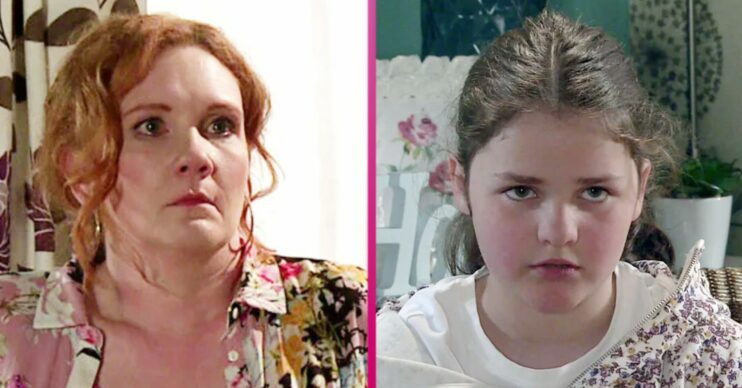 The wedding of her dreams seems a long way off

Coronation Street spoilers for next week reveal Fiz and Phill’s wedding looks on the verge of disaster thanks to Hope.

Mimi’s return isn’t helping matters either, so can Fiz and Phill really make this work?

Or are the odds just stacked too much against this cobbles couple?

Fiz is full-steam ahead with the wedding planning.

She is determined nothing will go wrong and in order to make sure her big day goes without a hitch she is rushing the wedding and getting married on July 8 come hell or highwater.

But despite her optimism, it’s not looking good.

Phill’s meddling mother Mimi is arriving for a pre-wedding visit, which fills Fiz with dread.

Meanwhile, we all know what Hope’s temper is like when things aren’t going her way…

She’s unhappy with her bridesmaid’s dress and boy does she let Fiz know about it. Let’s just hope Fiz picked something fireproof, eh?

Fiz also has some stress when her veil is frayed.

On her last nerve, Fiz says everything has to be perfect.

But Hope is listening from the hallway – what does she have planned?

Is she set to ruin the big day?

Or will she support her mum and stop at nothing so Fiz has the wedding of her dreams?

Either way, where Hope’s involved, it’s set to be dramatic.

As well as Hope causing trouble, Mimi comes to stay.

No hotels in the area will take her dog, so Fiz is forced to put her up at Tyrone’s. And that means Mimi and Evelyn under the same roof.

Mimi is quickly tripped up by Cerberus and she sprains her hip.

Evelyn makes no apology and defends her dog, causing even more tension.

Will they find a way to make it work?

Is Fiz really likely to get her dream day?