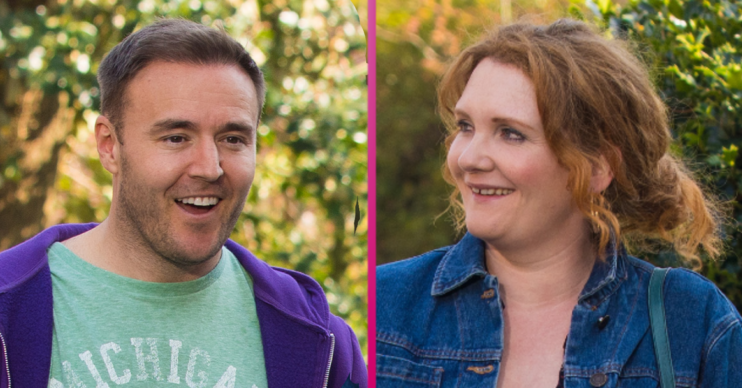 Will they get back together?

Coronation Street spoilers for next week see Fiz and Tyrone spending time together – could there still be a spark between the former couple?

Of course, there was big drama over Ty’s affair with Alina and his split from Fiz, but recent times have seen the couple getting on well for the sake of their kids.

Fiz has moved on with new love, Phill – quite literally she’s even moved into a new home with him, along with Hope and Ruby.

However, Fiz and Ty are in constant contact because of the girls. Meanwhile, Fiz still works in the factory across the road from Ty’s house.

Fiz and Ty get cosy on the sofa

With the pair spending a lot of time together, it’s clear that Ty is missing Fiz and enjoys his time in her company.

So, while she’s visiting the house, Ty suggests that Fiz stay for a while.

He offers to pop on one of their favourite TV shows for old time’s sake.

But how will Fiz react? Is Ty crossing a line?

Fiz is delighted to accept and touched by Tyrone’s kindness.

She jokes that they never had this problem when she lived at number 9 – her new house being a distance from the Street.

The joke leaves Ty wondering if Fiz is regretting her decision to move in with Phill.

When they arrive  to the house, Fiz offers to show him around.

What will Ty think of Fiz’s new home?

While it’s been obvious that Ty is regretting their split, how Fiz feels remains to be seen.

She and Ty are certainly getting along.

Will showing him her new house and her new life assure her that she’s done the right thing moving on?

Or are there still unresolved feelings between the pair?