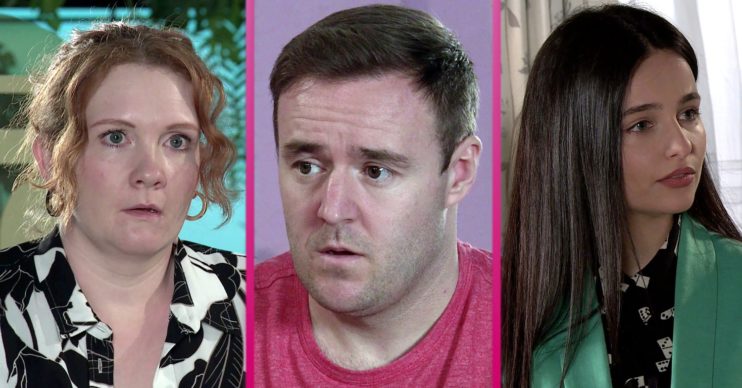 Coronation Street SPOILERS: Fiz to lose the girls to Tyrone and Alina?

The girls take a liking to Alina

Coronation Street spoilers reveal Hope and Ruby take a liking to Alina. But could Fiz lose them to Tyrone and his new girlfriend?

Recently Tyrone left his fiancé Fiz after falling in love with Alina Pop.

In last week’s scenes Fiz changed the locks on No.9 and refused to let him see the girls.

But in tonight’s scenes (Monday, April 26) Chesney calls at No.9 and warns Fiz that locking Tyrone out won’t solve anything.

He tells her to be the bigger person for the sake of Hope and Ruby. Soon Ches calls in a the garage and tells Tyrone that he’s persuaded Fiz to let him see the girls.

Tyrone gently explains to Hope and Ruby that he no longer wants to be with mummy as he’s fallen in love with somebody else. But he tells them that he will always love them very much.

Tyrone takes them both to Speed Daal for their tea. But when Hope spots Alina and asks her to join them, pointing out she’s Tyrone’s new girlfriend.

Tyrone and Alina are mortified that she’s figured out that they’re together.

Coronation Street spoilers: Fiz to lose the girls to Tyrone and Alina?

Later Fiz makes up with Maria and admits her biggest fear is that the girls will choose Alina over her.

Meanwhile, over tea, Hope quizzes Alina about her favourite things.

Tyrone’s delighted to see that the girls clearly like Alina and get on well with her.

Fiz soon steams over. Trying her best not to cry, she drags the girls away.

But could she end up losing Hope and Ruby to Tyrone and Alina?

Will you be watching tonight’s Coronation Street? Leave us a comment on our Facebook page @EntertainmentDailyFix and let us know what you think of these soap spoilers.