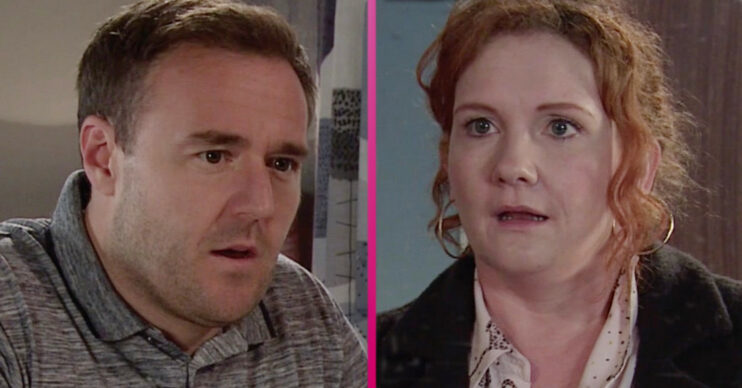 Will Fiz and Tyrone get back together this Christmas?

Coronation Street spoilers reveal there might be a chance we’ll see Fiz Stape reunited with her ex-boyfriend, Tyrone Dobbs this Christmas.

However, after a festive kiss Tyrone is left stunned by Fiz’as bombshell…

Tyrone definitely still has feelings for long-time love Fiz and most certainly does not approve of Fiz’s boyfriend, Phill Whittaker.

Phill is truly now playing the family man and has plans to whisk Fiz and her daughters, Hope and Ruby away from Weathefield to spend Christmas in a fancy log cabin.

However, those plans get chucked out of the window after Fiz gets wind that Tyrone is feeling down-in-the-dumps at the thought of spending Christmas Day without his family.

So just as Tyrone and his gran, Evelyn are about to sit down to a quiet Christmas Day dinner for two, there’s a knock at the door…

Fiz and the girls arrive… swiftly followed by Phill.

Tyrone is thrilled that Fiz has cancelled her holiday plans so their family can be together at Christmas.

Although he’s not quite so thrilled at having to be under the same roof as Phill!

But Phill’s presence doesn’t stop Tyrone getting some fuzzy feelings for his ex.

Read more: Find out why viewers don’t want Fiz and Tyrone to get back together

“I think for Tyrone it’s fuelled by drink and a longing to get back to what they had a year ago,” says Coronation Street star Jennie McAlpine who plays Fiz.

“Fiz is not prepared for it at all.”

So what’s the deal? Are viewers of the ITV soap going to see Fiz and Tyrone reunited?

“Fiz never fell out of love with Tyrone,” reveals Jennie. “But he broke her heart and his behaviour this year has tarnished a lot of happy memories for her.”

In fact, in the fallout from that kiss on Christmas Day, it looks like Fiz is ready to cut all ties with Tyrone…

He is left reeling when Fiz announces she wants to sell No.9 Coronation Street!

Back in the day, Tyrone was the lodger of Vera and Jack Duckworth when they owned the house.

Fiz has been living there with Hope and Ruby.

But now she is ready to make a fresh start and find a place to live with Phill.

“Fiz knows Tyrone won’t take it well but her memories in that house are tarnished now,” continues Jennie. “So when Phill offers her the chance of a fresh start she decides that’s what she needs.”

Can this really be the end for Fiz and Tyrone, and the legendary Duckworth house? Will Tyrone really agree to sell up?

What do you think of these Coronation Street Christmas spoilers? Leave us a comment on our Facebook page @EntertainmentDailyFix and let us know what you think.