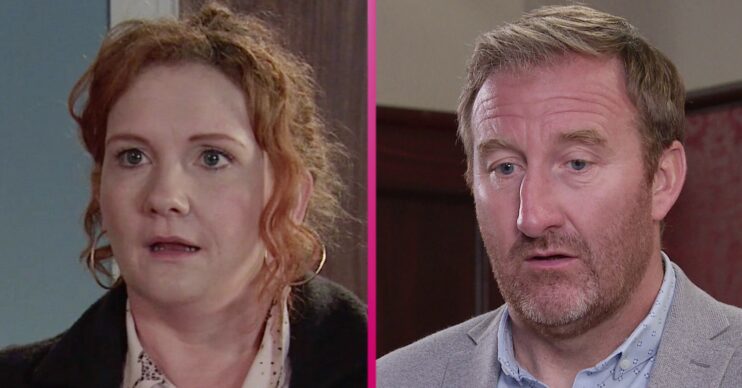 Coronation Street spoilers: Fiz stuns in first look at pictures from her wedding to Phill

Will the wedding go to plan?

Phill recently proposed to Fiz and the pair have been planning their wedding on top of renovating their new home.

Now it looks like their wedding won’t be too far away as the cast have been spotted filming the scenes.

Coronation Street spoilers: Fiz stuns in first look at pictures from her wedding to Phill

In pictures obtained by The Sun Fiz can be seen wearing her stunning off-the-shoulder wedding dress with matched heeled pumps and a bouquet of flowers.

But will Fiz and Phill’s big day go to plan?

A few weeks ago, Fiz and Phill briefly split after she found out he planned to write a book about her serial killer ex-husband John Stape, who is also the biological father of her daughter Hope.

However Phill ended up proposing to Fiz and she accepted.

Although Fiz’s former fiancé Tyrone was clearly upset, he congratulated the couple.

But it looks like Tyrone isn’t the one Fiz and Phill will need to worry about as Phill’s ex is due to arrive.

Last week it was revealed that former Emmerdale star Louise Marwood will be joining Coronation Street as Phill’s ex-wife Camilla, who is set to cause chaos as Phill and Fiz’s draws closer.

A source told The Sun: “Phill’s ex-wife will make herself known on the cobbles in the coming weeks.

“She is set to cause chaos as Fiz and Phill’s wedding gets closer.

“But what does she want? And will Fiz be able to deal with both Camilla and future mother-in-law Mimi misbehaving?”

Read more: Who is in the cast of Coronation Street 2022? Meet this year’s full line-up