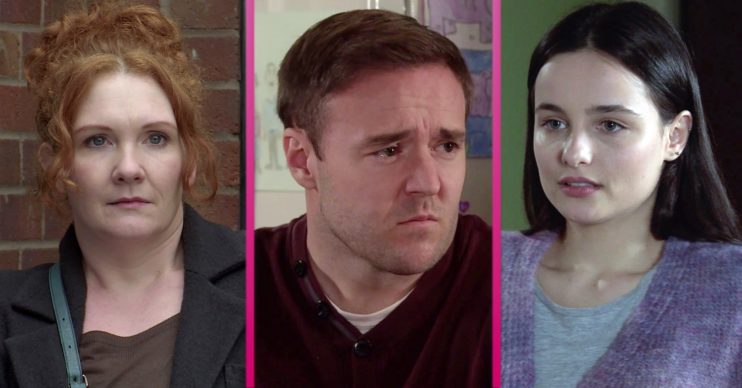 Coronation Street spoilers reveal Fiz is crushed as Tyrone confesses he’s in love with Alina. Is this the end for the couple?

Recently Tyrone confessed to Fiz that he shared a kiss with Alina. Although the couple agreed to try again, it looks like they will end up splitting for good.

In next week’s scenes Tyrone heads off to work whilst Fiz starts packing for their caravan holiday. In the street, Tyrone explains that Alina that it was Fiz’s idea for her to move away and not his.

Having found out from Sally about Tyrone’s chat with Alina, Fiz rails at her fiancé.

As Tyrone packs up the car, he spots an Immigration Enforcement van outside the salon flat.

Tyrone races over and Alina tells him that they’re raiding the premises as someone reported her for tax evasion. He immediately accuses Fiz of shopping Alina to immigration.

Fiz is furious with Tyrone for accusing her of shopping Alina to the authorities. She looks Tyrone in the eye and demands to know how he feels.

He soon admits to Fiz that he’s in love with Alina.

Having barely slept, a weary Fiz explains to Ches that it’s not just about Alina, but her and Tyrone’s relationship died a long time ago.

Meanwhile Tyrone thanks Kevin for letting him stay and assures him he made the right decision leaving Fiz.

Recently Alan Halsall revealed that he was shocked when he discovered the storyline for Fiz and Tyrone.

Speaking to Entertainment Daily and other media about how he felt when he learnt about the storyline, Alan said: “Shocked! It did come as a bit of a surprise to me for sure, and then you start to think of your own selfish things as an actor.

“Myself and Jennie have know each other for 20 years and honestly there is not a day that goes by that I don’t love working with that woman.

“She’s the most professional and just a joy to work with on a day to day basis. I love working with her.”

He added: “As a character it’s fantastic, we want to be part of big stories and this is a big story.

“It was a big twist to me and I’m hoping that it will be a big twist to the audience and I hope people are spitting out their cup of tea at half seven on a Monday night saying, ‘ooh, what’s he doing now?’

“And I’m sure I’ll get clipped round the ear in Tesco a few times for it. But these are the stories that we want to be involved with and I’m glad to be a part of it.”