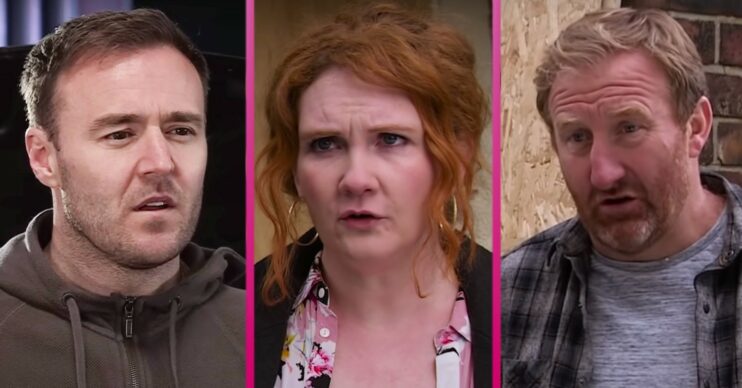 Coronation Street spoilers: Fiz and the girls move back in with Tyrone after dangerous revelation?

What is Phill playing at?

In the latest Coronation Street spoilers, Fiz, Hope and Ruby could all move back into No 9 with Tyrone.

It has been a hectic few weeks for Fiz and the girls after setting up home with her fella Phill.

However, they’d hardly even settled in before Hope discovered Phill had a secret interest in her notorious serial killer dad.

Hope then made use of a mini-digger to vandalise Phill’s car! And before long she, her sister and her mum headed back to Tyrone’s home on the Street.

That also led to Fiz calling things off with Phill when she realised he wanted to write a book about her psychopathic ex who fathered troubled Hope.

Read more: Coronation Street spoilers: Abi reunited with baby Alfie thanks to a blast from the past!

But following a bit of a tussle in some wet cement for a patio with Tyrone, Phill somehow wheedled his way back into Fiz’s affections.

He even proposed – and she accepted!

However, just a few weeks on, Fiz and the girls are on the way back to the cobbles of the Street following a dangerous revelation from Phill.

It becomes ever more clear during next week’s episodes of the ITV soap that it isn’t just Phill’s patio that needs a bit of work.

It turns out the rest of his home isn’t suitable to bring up a young family in, either. And that’s because the entire house needs rewiring.

Indeed, Phill admits the place is a death trap.

And he can’t help but agree with Tyron’s solution for Fiz, Hope and Ruby to live with him while the necessary work is carried out.

All change for Fiz and the girls again. How many times can they go back and forth?

Later Phill reveals that his mother can attend the wedding and wants to be involved in the preparations.

Fiz puts her foot down and says she can come to the wedding, but that’s it.