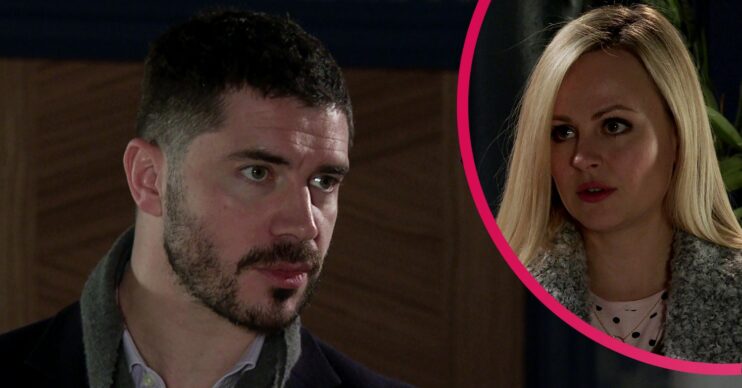 The popular couple are about to hit a rough patch

News spoilers for Coronation Street spell trouble for Sarah Platt and Adam Barlow – after all, marriages don’t tend to last very long, as the pair are about to find out.

The couple – who only married two years ago – have been hit by a series of disasters already.

During one break he slept with his aunt-in-law Carla Connor.

And Sarah has been hiding a deadly secret from him about Callum Logan’s murder and her connection to ex Gary Windass.

He was also left for dead after a brutal attack.

And there’s the current issue of his ex Lydia worming her way into their lives.

However, things seem to be back on track despite halting plans to try for a baby.

But despite all this the couple don’t make it easy for themselves.

Next week it’s Sarah’s birthday but Adam doesn’t exactly go all out.

He announces he’s taking her to the Bistro for her birthday and has bought her a smart oven as a present.

Is this another nail in their relationship’s coffin?

Corrie boss Iain Macleod recently teased even more strife to come for the couple when Lydia’s true intentions are revealed.

Lydia had a brief relationship with Adam at university – though he barely remembers it.

Clearly she thinks it was more than it was – and in coming weeks will show her true colours.

Iain explained: “We wanted an updated version of a 90s thriller – like Fatal Attraction.

“They look horribly dated in gender politics. So what would it look like as a 21st century story?

“I hope we’ve crafted it, everyone behaves badly, it’s very nuanced but she becomes a threat to the marriage; a catalyst for Sarah and Adam to destroy themselves.

“There is lots of scheming and intelligent subterfuge in several parties. It culminates in some exciting pay off in the first six months.

“It starts small and even humorous with Adam and Sarah as they take pot shots, gradually it becomes more nightmare-ish.