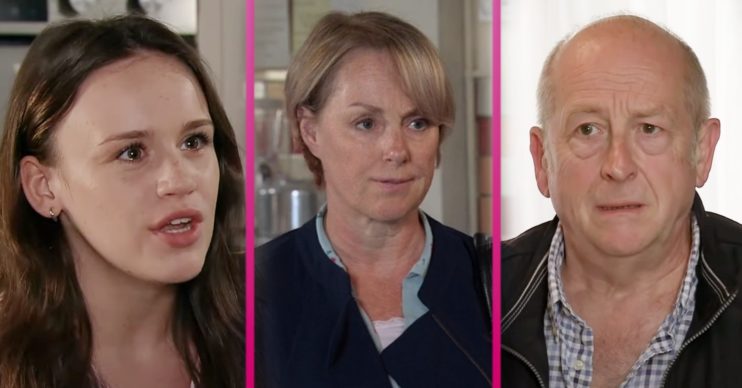 Is Geoff about to be caught out?

Coronation Street spoilers reveal Sally gets a hold of Geoff’s CCTV footage. But will they find evidence that Geoff was abusing Yasmeen?

In next week’s Corrie episodes, Sally and Tim are still at loggerheads.

Geoff assures his son that he is the innocent one and a weary Tim promises he believes him. Meanwhile Sally confides in Cathy about the CCTV and Cathy tells her any footage will be on Geoff’s laptop.

Sally tells Faye she wants to get a book for Yasmeen so she can get keys to No.6. Seeing Geoff’s laptop she puts it in her bag just as the radio DJ returns.

Having got out of the house, Sally shouts for help and a bemused Tim takes her home.

She tells him she got her hands on Geoff’s laptop and wants to try and view the CCTV footage. With Faye’s help, they try to download the deleted camera app and CCTV footage.

Has Geoff finally been caught out?

Later the police arrive at No.4 and tell Geoff new evidence has come to light and they need to ask him more questions.

A heartbroken Tim tries to track down Elaine, worried about her. Having spotted Tim, Geoff hurries over to him, but what does he have to say?

Later Tim returns from Bolton and tells Sally, Alya and Imran there was no sign of Elaine. Judging by the pile of post on the floor, it looks like she hasn’t been there for a while.

Where has she gone? And is Geoff involved with her disappearance?

Tim later apologises to Alya, telling her how sorry he is that he failed to see what Geoff was like along.

Is Tim finally on Yasmeen’s side?