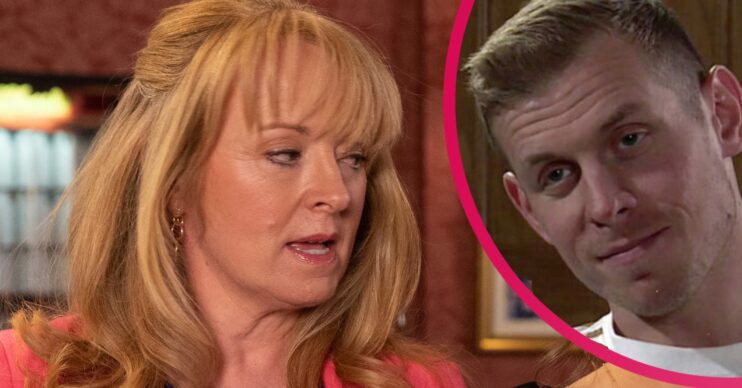 Latest Coronation Street spoilers have revealed a potential exit for Jenny Connor. If true, she may leave Weatherfield for a life in Canada.

After learning that partner Leo Thompkins will be moving across the pond, Jenny considers following him.

However, a later altercation with Daisy may put paid to her plans.

Could Jenny really be leaving Weatherfield?

Read more: What is Aaron’s secret? Is he hiding something?

As landlady Jenny learns of Leo’s imminent exit, she feels upset and betrayed.

She is angry to hear that Leo is planning on heading to Canada, without having consulted her first. She is left feeling betrayed when he fails to share that his work in Weatherfield is over, and that he is planning to leave.

However, she soon begins to consider joining Leo across the pond.

In scenes set to air next week, Jenny confides her thoughts and plans in Daisy Midgeley. Daisy pushes her to go for it and leave her life in Weatherfield behind.

But does Daisy have an ulterior motive?

Later, Jenny overhears Daisy tell Daniel that she is ready to run the Rovers by herself.

She comes to the conclusion that Daisy is manipulating her, trying to get rid of her so that she can become landlady of The Rovers.

Read more: Coronation Street spoilers: Wendy and Ken back together?

An angry Jenny confronts Daisy, accusing her of wanting her out of the way.

It appears that this altercation could have scuppered both of their plans.

Will Jenny move to Canada, or stubbornly stay in Weatherfield, just to spite her rival?

Is Daisy set to be the Rovers’ new landlady?

Read more: Who is in the Coronation Street cast list 2022? Meet the full line-up