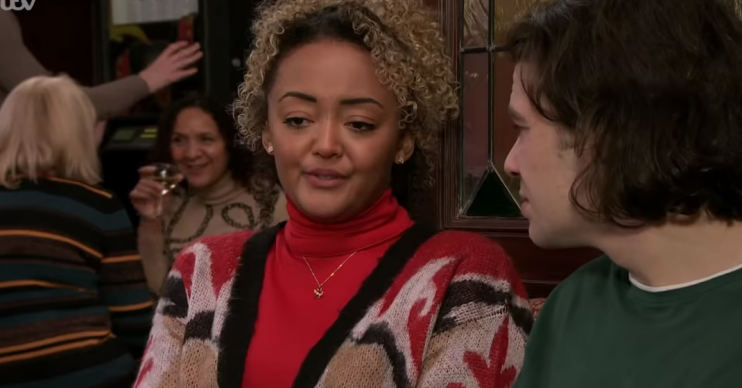 Does Seb have feelings for his ex?

It looks like there could be heartache heading for Coronation Street’s Emma Brooker next week when she inadvertently pushes boyfriend Seb Franklin to spend time with his ex Alina Pop.

Ever since Alina arrived back on the cobbles, it’s been clear that there are still some feelings between Alina and Seb, and it hasn’t gone unnoticed by Emma.

But despite Emma and Seb’s romance still going strong, she has started to worry that perhaps she likes him more than he likes her, and next week sees the Rovers barmaid venting to Maria.

Emma’s suspicions that Seb isn’t that into her appear to be confirmed when she reveals her mum has offered to pay for them both to go and visit her in Australia.

But despite the fact Emma is offering Seb the trip of a lifetime for free, he doesn’t seem that keen and she is heartbroken.

Seb later has a change of heart and agrees to go to Australia, but while Emma is thrilled she still can’t seem to shake the idea that Seb is hiding something.

When Emma confides in Maria about her suspicions, Maria advises her friend to play it cool and so Emma tells Seb that he needs to make himself scarce that evening because she wants to have the girls round.

But while Emma is enjoying a girlie evening with her friends, it seems her plan to make Seb realise what he is missing has backfired completely when he heads to the Rovers and bumps into Alina.

As the pair enjoy a drink together, it seems Emma might regret taking Maria’s advice… but are the old flames just friends? Or is that spark between them about to reignite?

Later in the week Emma is worried when she overhears Mary warning Alina to tread carefully with Seb… so Emma confronts her boyfriend’s ex about her intentions.

Telling Alina that if she still has feelings for Seb then she would rather know now so that she can walk away, Emma prepares herself for the worst.

However, she is pleasantly surprised when Alina assures her that she has no interest in Seb and would never do anything to hurt her.

But later when Seb offers to buy Alina a drink, she refuses, leaving Seb looking hurt.

Alina might be adamant that it is over between her and Seb… but does he feel the same way?

Do you think Seb is better suited to Emma or Alina? Leave us a comment on our Facebook page @EntertainmentDailyFix and let us know what you think!