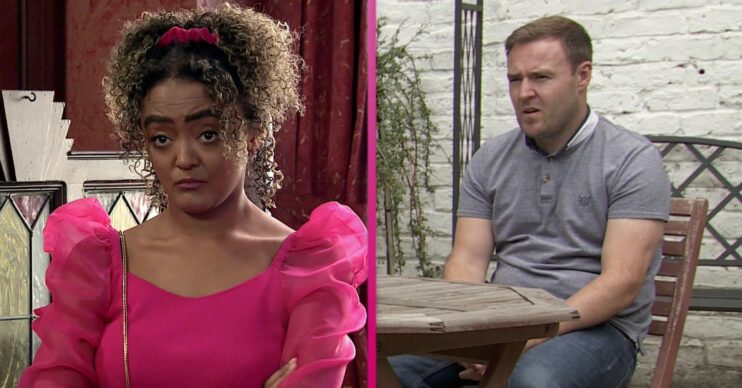 Coronation Street spoilers for next week reveal Emma is suspicious about Tyrone and Fiz. Is she right?

In next week’s scenes Tyrone is guilt-ridden about his feelings for Fiz.

The pair are awkward around each other as they meet the youth justice officer.

Emma soon sees Tyrone and Fiz in deep discussion. She’s immediately suspicious. What has she heard?

Unsure of how much Emma has overheard, Tyrone blathers an explanation that he and Fiz were just talking about childcare.

Later Tyrone presents Alina with the expensive ring that she wanted.

Alina is thrilled, while Emma tries to work out if it’s genuine or just for her benefit.

Earlier this year, Tyrone broke off his relationship with Fiz as he had fallen for Alina.

The two quickly moved in together and Alina discovered she was pregnant.

However Tyrone’s daughter Hope ended up starting a fire at the salon flat, unaware Alina was asleep in her room.

Alina was taken to hospital and it was later revealed she lost her baby.

Tyrone and Fiz discovered that Hope started the fire and Tyrone decided to tell Alina the truth.

Furious, Alina broke up with Tyrone. However in this week’s scenes, Tyrone saw Alina walk out of the pub drunk and walked her home.

Back at the flat, Tyrone admitted that he saw a future with Alina and imagined them getting married, having kids and growing old together.

She then agreed to try again and said they should get married. Tyrone smiled and appeared happy, but did he mean to propose?