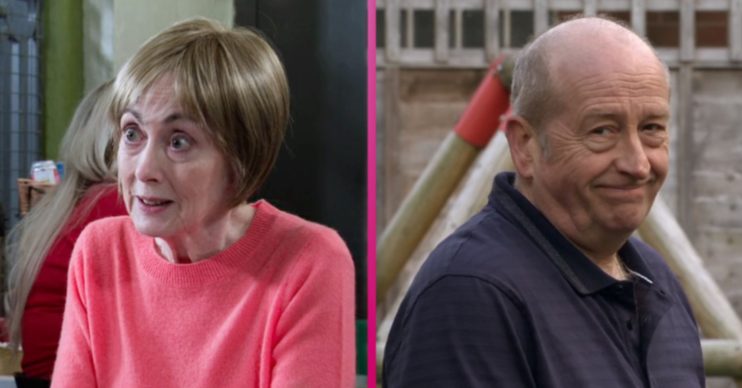 Has Geoff killed her?

Coronation Street spoilers reveal Elaine mysteriously goes missing. But has Geoff got something to do with it? Has he killed?

In next week’s Corrie, Elaine introduces herself to Sally in the cafe and explains that she’s Tim’s mum.

She reveals it broke her heart to abandon him but Geoff made her life a living hell and now she wants to do what she can to help Yasmeen.

Sally urges her not to give up on Tim as one day he’ll understand. As Elaine heads to Street Cars looking for her son, she’s horrified when Geoff approaches her.

Later Sally implores Tim to accept that Elaine could very well be telling the truth and Geoff has fed him lies all of his life.

Tim refuses to listen but it becomes clear that her words have hit home.

Meanwhile, Alya is worried that something has happened to Elaine and decides to report her missing to the police. Where has she gone?

But it looks like Faye may know something. She asks Geoff who he was arguing with in the ginnel and her grandad continues to insist that Elaine is a mad woman and he has no idea who she actually is.

He insists to the police that his first wife is dead. But Sally tries to get him to tell the truth.

With all eyes on him, Geoff swears that Elaine is telling lies. He claims she is not Tim’s mum and Alya must have put Elaine up to it in order to drive a wedge between them.

Sally begs Tim to open his eyes and see that his dad is an abusive bully but Tim’s angry and warns her not to make him choose between her and his dad.

When Geoff tries to enter the restaurant, Alya blocks his path and threatens him with a broom.

Geoff admits to Tim that he did confront Elaine, but only tell her to keep away from the family and peddle her lies elsewhere.

Tim ends up ripping up Elaine’s phone number and tossing it in the bin, telling Sally he’s had enough of her suspicions.

But where is Elaine? Has Geoff done something to her?