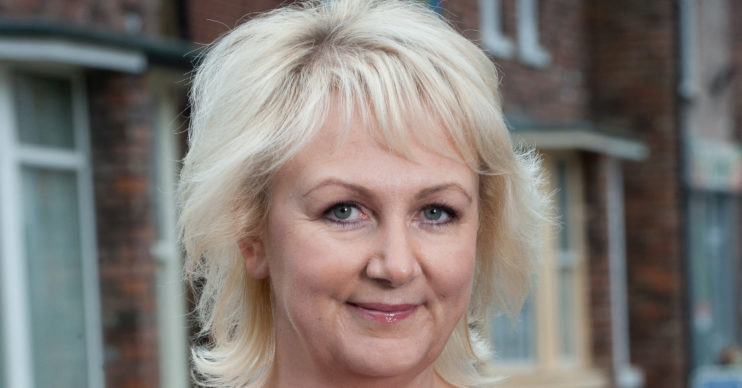 Eileen's passions will be enflamed later this month

Eileen Grimshaw is getting a new love interest in Coronation Street.

The unlucky in love taxi switchboard operator has been married to a serial killer and duped by an undercover whistleblower in a human trafficking gang.

But now Corrie boss Iain Macleod has confirmed she is set to find happiness in the form of Archie Shuttleworth’s son, played by Benidorm star Tony Maudsley.

Speaking on a press Zoom to Entertainment Daily and other media, Iain said: “Eileen’s son will return to the cobbles and cause her no end of grief but it does throw a brand new character into Eileen’s orbit who has deep roots in Corrie.

“He’s one of our archetypal Northern comedy characters who will turn her life upside down in a fun fashion. A will they/won’t they that will keep people guessing.”

Read more: Coronation Street: Why has Ali gone to prison for four months?

The actor, who played Kenneth du Beke in the ITV comedy, has swapped the Spanish sun for the cobbles.

Tony confirmed the news on Twitter. He wrote: “I’m chuffed to be staying at my @itv home and heading to Weatherfield and I for one, couldn’t be happier.

Tony’s Corrie debut had been postponed due to coronavirus lockdown.

A Corrie source told The Sun: “The bosses are really excited about Tony joining the soap.

“He’s a great comedy actor and created one of Benidorm’s most-loved characters in Kenneth. So it’s a shame he didn’t get to start when he was supposed to.

“But he’s looking forward to making his entrance when things finally get back to normal.”

Who was Coronation Street’s Archie Shuttleworth?

Archie was an undertaker at Shuttleworth’s Independent Funeral Directors.

During his time on the show, he fell for Audrey Roberts, however she didn’t feel the same.

However, in 2008, Audrey received news that her old friend Archie had died. She also discovered he had left her £80,000 in his will.

But what brings Archie’s son to the Street?