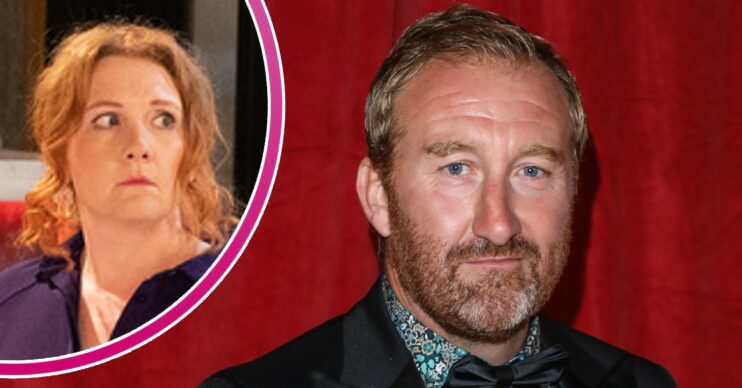 New wife Fiz realised she had made a terrible mistake in marrying him.

She told him it was over and fled.

But he has no idea she ran back into the arms of her cheating ex Tyrone.

Now actor Jamie has revealed the double betrayal Phill will experience after he finds out the awful truth.

Fans know Phill has grown close to Tyrone despite their complicated dynamic.

“I really think if he found out that it was anything to do with Tyrone the double betrayal of that would be devastating,” Jamie said.

“It would be a double whammy because he’s come to the street and he’s built a network but it’s all around Fiz, and Tyrone has become a good friend.

“He’s becoming a better friend by the day. He’s helped to kind of manufacture this situation. He helped Phill find the engagement ring.

“He put in a good word, so if he was to find out that it was something to do with them two it would be a double loss and a huge double betrayal.”

But for now Phill won’t even suspect that Fiz and Tyrone are back together.

Instead he will throw himself into trying to win Fiz back.

And in a shock twist he will recruit Tyrone to help him.

“That being said it’ll be one of the things going through his mind but I think he’ll dismiss it because he’ll think well if it’s that why has it not happened before.

“If she wanted to be with Tyrone she’s had plenty of opportunities, with the book, the mistakes that Phill’s made, the fact she moved back in with Tyrone.

“So I don’t think it’s his number one choice as to why this has happened.”

But will discovering the truth see Phill turn into a villain?