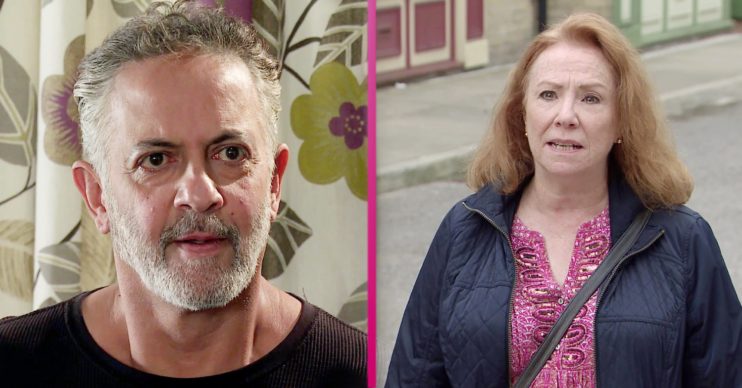 This means residents could lose their jobs

Coronation Street spoilers reveal Dev tries to sell the kebab shop. Have his money troubles really got that bad?

In next week’s episodes, Dev shows an estate agent around the kebab shop. As he does this, Asha and Aadi exchanged worried looks.

Meanwhile Cathy and Bernie are shocked to realise they could be out of work and Mary is deeply concerned for her friend.

Dev asserts that he’s putting the welfare of his family first.

However later he is furious when he catches Asha kissing Corey in the ginnel.

Nina calls to see Asha and gently suggests that she can do much better than Corey and that she should just be herself and the right boy will come along.

Meanwhile Chesney has heard about the sale off the kebab shop and points out his family rely on Dev for a living.

Asha blames herself, aware that her school fees are financially crippling her dad.

Later Aadi returns home to find Asha entertaining Corey and isn’t sure what to do.

Asha decides to leave a message for Dev telling him the truth. But when Dev returns home he rails at Asha for seeing Corey behind his back.

Earlier this year, Dev decided to pull Aadi and Asha out of their school Weatherfield High and put them into Oakhill private school.

This was after a video of Asha stripping was sent round to her peers.

Although it was only meant for Corey, he secretly recorded their call and when Kelly Neelan saw it on his phone after an argument with Asha, she shared it to their friends.

After enrolling his kids at the new school, viewers saw Dev log into a payday loan website. Is he really going to have result in selling the kebab shop to pay the bills?