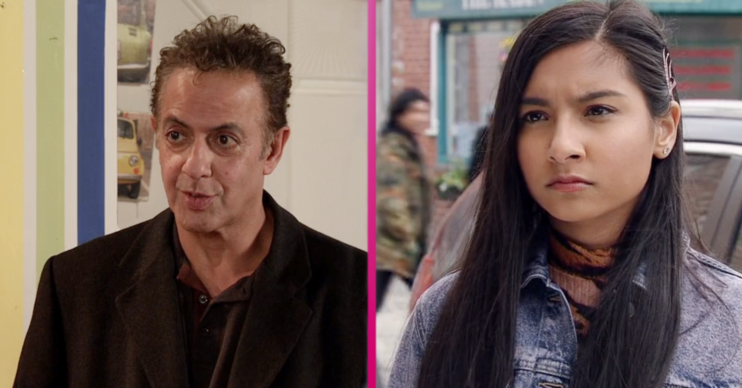 He's on the edge

Coronation Street spoilers reveal Dev is facing financial struggles. But will he have to result to desperate measures to get by?

In next week’s episodes, Dev looks at the pile of unpaid bills and wonders how they’re going to cope.

Sensing something’s bothering her dad, Asha offers to do a shift at the kebab shop.

Later, Cathy confides in Asha that Dev has reduced her hours in the kebab shop.

Later, Mary and Cathy discuss Dev’s money problems after Cathy tells her about her hours being cut. Will Dev tell them what’s going on?

Will they stage an intervention with Dev before it’s too late?

Earlier this year, Asha was horrified when a video of her stripping was sent around to her peers.

The teenager stripped for her on-off boyfriend Corey, who secretly recorded their video call. However Kelly Neelan saw the video and sent it round the school when Asha upset her.

The video ended up being seen by many of her school friends and it was brought to Dev’s attention by David Platt.

Corey, Asha and her pal Amy all figured out that Kelly must have sent the video and confronted her about it.

However the aftermath of the video getting out proved to be difficult for Asha and she was called names and picked on.

Dev soon decided to pull Asha and her twin Aadi out of their school, Weatherfield High, and put them in Oakhill Private School.

But as Dev celebrated his kids going to a new school, viewers saw him log into a payday loan website.

Has this contributed to Dev’s struggling financial state? Will he be able to get help?