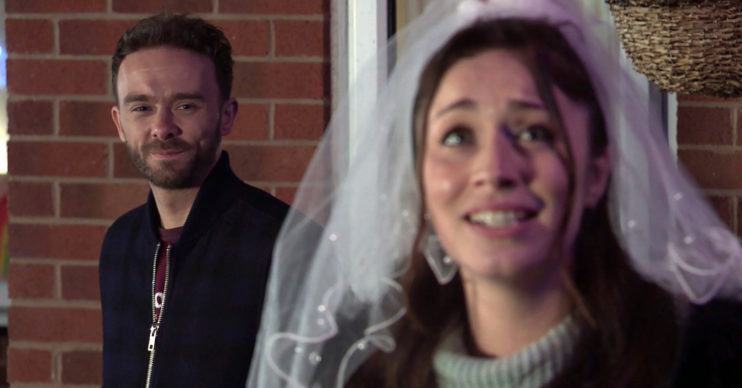 It's finally looking up for the pair

Viewers of the ITV soap will know it hasn’t been easy for David and Shona following her horrific brain injury last year.

However, the festive period sees the pair grow closer when they end up in a dash to A&E together.

Ahead of the romantic gesture, it appears things couldn’t get much worse for the two.

Following a tense conversation, they get their wires crossed and David wrongly thinks Shona doesn’t want to be with him.

The couple try to come to terms with the fact their relationship is beyond repair.

But just as it seems the Platts’ marriage is over for good, on Christmas morning Lily is rushed to hospital.

While watching Shona support Lily in hospital, David soon realises how much he loves his wife and decides to give it another go.

He enlists Max and Lily to help him recreate the couple’s wedding, which includes a romantic gesture of fake snow.

Shona, who is unable to remember their big day, appears delighted as she walks onto the cobbles in her veil.

In that moment, David feels like the luckiest man on earth as he beams behind his wife.

Julia Goulding opens up on David and Shona’s reunion

Speaking to Inside Soap, the actress said: “David and Shona will always find each other again. It’s been nice falling back in love!”

She added: “Shona struggles to get her feelings across.

Read more: Coronation Street: David Platt has been in the soap for how long?

Their relationship took a turn for the worse last Christmas after Shona was shot and suffered a traumatic brain injury.

However, the actress insists things are finally looking up.

“The past 12 months has been building up to this big shift in their relationship,” Julia concluded.

“Given what they have come through, and where they are now, David and Shona are a good match!”