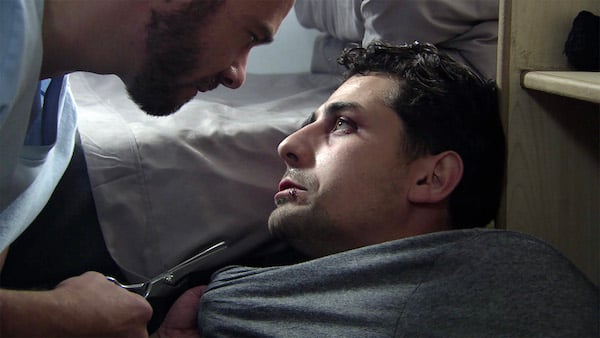 Is he about to get the ultimate revenge?

Josh Tucker finds himself at David Platt’s mercy during a prison riot in next week’s Coronation Street, but will David finish his nemesis off for good?

However, it sees one false move could change all that when he finds himself with the chance to get the ultimate revenge on the man who raped him.

As a riot breaks out in prison, David retreats to his cell, determined to make sure he doesn’t get caught up in the trouble.

However that all changes when his new jail ally Abe drags a terrified Josh into David’s cell and hands him a pair of scissors.

Knowing that Josh raped David last year after drugging his drink and taking him back to his flat, Abe gives David the perfect opportunity to finish Josh off for good. But will he take it?

As Abe encourages David to do his worst, David is faced with the dilemma of a lifetime and tells Abe that he wants to deal with Josh alone.

As the pair come face-to-face, Josh sees his life flash before him… and as David drags him to the top of a staircase with the help of Abe and Tez, it seems he is right to think that David is planning revenge.

But can David really put his past demons with Josh before his future with Shona and the kids?

Back on the cobbles, the Platts are horrified as they watch the prison riots unfold on the local news… and soon they’re relieved when David calls Shona.

However, David’s ringing with the terrifying news that Josh has been stabbed and David tells Shona that she needs to find him a lawyer – and fast.

Shona is horrified to think that David has attacked Josh, but he is adamant that he didn’t have anything to do with Josh’s injuries.

But while Shona wants to believe David, Max is then sent a video of the prison riots and it clearly shows Josh collapsing from a stab wound with David very close by.

Shona reels at the thought of David going to prison for a very long time and it’s not long before Max and Sarah are also convinced that David has done the unthinkable.

And if his own family don’t believe he is innocent, how will he convince the police?

Later Imran visits David in jail and tells him about the video that implicates him in the attack on Josh, and David is left reeling that he could be found guilty.

As David maintains that he is innocent, will anyone actually believe him? Or is he about to find himself locked up for a very long time?

Do you think David is guilty of stabbing Josh? Leave us a comment on our Facebook page @EntertainmentDailyFix and let us know what you think!