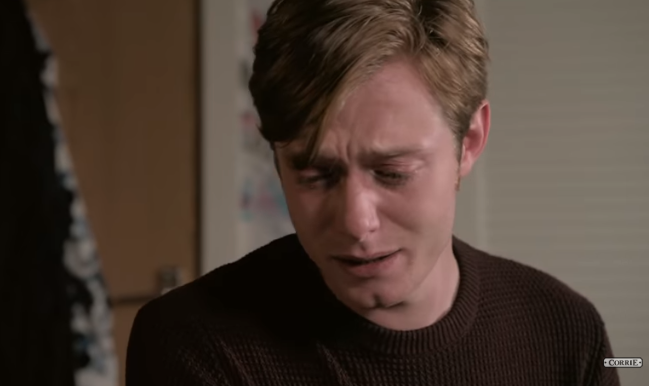 Coronation Street SPOILERS: Daniel left for dead after being run over

His drunken behaviour comes to a terrifying end next week

Daniel Osbourne is going to be left for dead in Coronation Street after a horror car crash.

Mourning Daniel has been struggling to cope with the death of wife Sinead Tinker recently.

He has been turning to alcohol to cope with losing her earlier this year after she died of cervical cancer.

In episodes set to air later this month Daniel’s struggle becomes all too obvious for his family.

They find him sobbing hysterically in his dirty and unkempt flat with baby Bertie as the pair watch videos of Sinead.

His horrified father Ken gives him a harsh reality check and tells him to pull himself together – but it has the opposite effect.

Instead of trying to do that, Daniel turns to booze once more and starts sinking pints over lunch with Peter and Adam.

When he steps outside to leave, he walks straight into the path of Cathy’s car and is sent flying.

Will he survive or will baby Bertie be made an orphan before his first birthday?

Actor Rob Mallard has previously given a hint that Daniel will survive by talking about his long-term struggle in the wake of Sinead’s tragic death.

He told Inside Soap: “I always see [the story] as being in split into two, the first part was leading up to the death, and the other is about being a widower at a young age, and not knowing how to navigate that.

“Sinead’s death was a peak, but this story won’t be winding down anytime soon.”

The soap has hinted about Daniel moving on with Bethany Platt, who he infamously kissed as Sinead lay dying, but with actress Lucy Fallon soon to be leaving the soap that won’t end well.

Could it a blow too far for Daniel losing another he cares deeply about?

Do you think Daniel can recover? Leave us a comment on our Facebook page @EntertainmentDailyFix and let us know what you think!