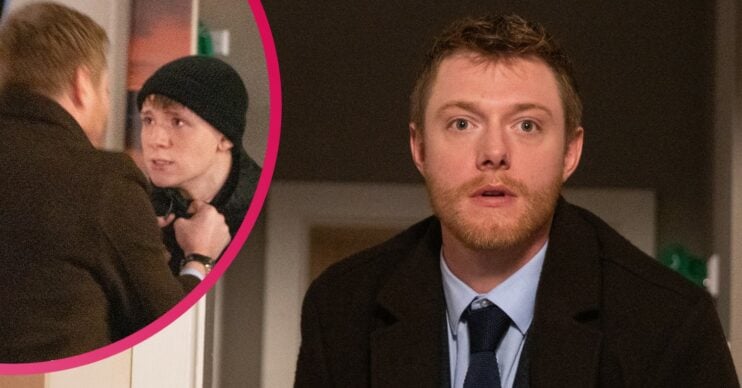 Coronation Street spoilers for next week reveal Daniel pushes Max down the stairs, but has he killed him?

When Lydia suggests to Daniel he should use the workshop to teach the boys about the history of feminism, Daisy’s disparaging.

Daniel is pleasantly surprise when Max arrives and suggests the reason he turned up for the workshop was because of David.

David realises he will need to tell Max what’s happened to him, but he’s furious with Daniel for putting him in prison.

In the shop, Dev places they keys to Daniel’s flat on the counter and while he’s distracted, Max swipes Daniel’s keys.

Max lets himself into Daniel’s flat and begins to smash the place up, accidentally breaking a clay of Sinead’s, Daniel’s and Bertie’s hands.

Daniel returns home to find his flat has been trashed with Max emerging from the bedroom.

When Daniel finds the broken clay imprint, he shoves Max out the door.

Max trips and tumbles down the stairs.

Daniel stares at Max’s seemingly lifeless body and calls an ambulance. David hurries over to the flat.

The police question Daniel about Max’s fall and he lies, making out Max fell.

As Daniel comes out of his flat, an officer explains that he’s investigating what happened with Max.

Daniel maintains his story that Max tripped by accident. David approaches him in the street and accuses him of lying.

However when she says she thinks he’s hiding something, Daniel gets defensive. Soon they begin hurling insults at each other, but Daisy admits she wants Daniel and they kiss.

They leap apart as Lydia enters.

Later Mrs Crawshaw summons Daniel to the school and accepts that he didn’t push him.

She invites him to apply for a permanent post at the end of his placement. However David and Shona are outraged.