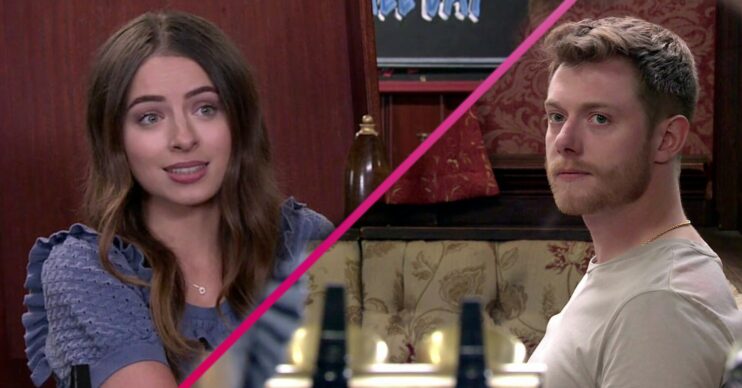 Not content with having nicked Ryan off Alya, the fickle minx makes a play for the newly-minted Barlow.

Daisy’s interest is piqued when she overhears Daniel and Adam talking about the valuation of the house he’s inherited.

Upon hearing the property is worth £400,00, Daniel suddenly becomes much more attractive to the mercenary maneater.

He just assumes she’s still loved up with Ryan, as does the feckless Connor himself.

Even Adam raises an eyebrow when Daisy asks about Daniel’s relationship status, reminding her that she’s not single.

But nothing can deter Daisy from getting her man.

Stage one of the plan involves convincing Daniel that they have the same interests.

However, Daisy’s attempts to share a love of Byron fall flat when Ryan reveals her search history.

He’s confused about why his girlfriend has been Googling Byron quotes and shares his mystification when Daniel is in earshot.

Undeterred, Daisy covers the faux pas by talking to Daniel about her dreams of being a teacher one day.

The kind-hearted academic drops off some books to help her pursue this ambition.

Once again, Ryan is bamboozled, but when he calls Daisy on it, she just flounces out.

Everything changes when Daniel suffers every parent’s worst nightmare with his son Bertie.

He thinks the little lad has swallowed a battery and rushes him to the hospital.

On the way out, Daisy offers to administer first aid – only to get pushed aside by distraught Daniel.

Read more: Coronation Street: Hope will become a serial killer, fans predict after she sets a fire to kill Alina

The next day, when the dust has settled, and everyone knows it was just a false alarm, Daniel feels awful.

He chats to Jenny, who tells him that Daisy was badly affected by the death of Tom, her younger brother.

When Daniel catches up with Daisy, she talks about how she took up first aid after his tragic death.

It’s a moment of closeness that gives Daisy hope that she’s now on Daniel’s radar.

But what does her campaign mean for Ryan and their relationship?