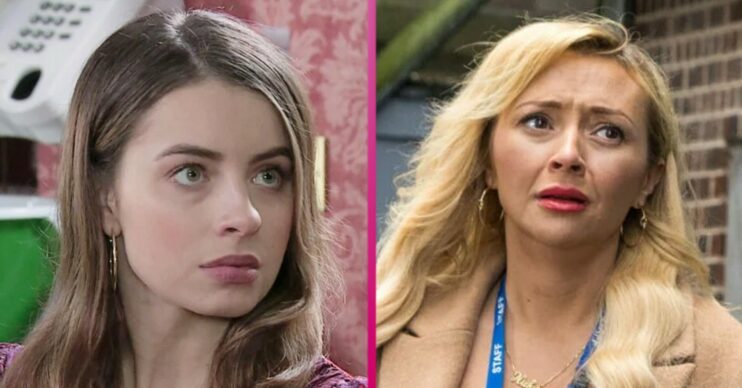 But did she do it?

Coronation Street spoilers for next week reveal Daisy is in the firing line when Nicky‘s past is revealed to the school.

But did she do it?

Daniel seems to think so and it could spark the end of their relationship unless she can prove otherwise.

Is it all over for this Corrie couple?

Daisy makes plans to get rid of Nicky

As Nicky and Daniel continue to plan the school trip to Edinburgh, Daisy is fed-up.

She takes them a packed lunch to the school, but is put out when Mrs Crawshaw didn’t know Daniel had a girlfriend and then tells her to knock before disturbing Daniel and Nicky.

Completely paranoid, Daisy tells Jenny she has a plan: she’s going to get Nicky a boyfriend and get her out of their lives.

She soon plays the caring girlfriend, suggesting Nicky and Daniel meet her in the pub for a drink to celebrate Nicky’s first day at work.

Nicky arrives at the Rovers only to find she’s been completely set up and Daisy’s ex, Ashley, is waiting.

Embarrassed Nicky leaves quickly and Daisy quizzes Ashley. He reveals he used to know Nicky when she was a sex worker.

Daisy asks Daniel for the truth, but will he give it to her?

Meanwhile, Daisy then confronts Nicky, who makes it clear she is not interested in Daniel.

However, not satisfied, Daisy asks Daniel to keep away from his ex.

Daniel completely ignores Daisy and she is upset to see him and Nicky looking cosy in the cafe together later.

When Nicky is later summoned to a meeting to discuss her past with Mrs Crawshaw she is forced to confess she did used to work in the sex industry.

Nicky is left distraught that videos and images from her past have been plastered all over the school.

Mrs Crawshaw is left with no choice but to suspend her.

He blames her entirely for leaking the truth about Nicky around the school.

She confides in Jenny she is hurt Daniel thinks she could do something like that. She can’t believe he’d think her so malicious.

But who did do it? And will Daisy be able to prove her innocence?

What does this mean for her and Daniel? Can she forgive him for accusing her?