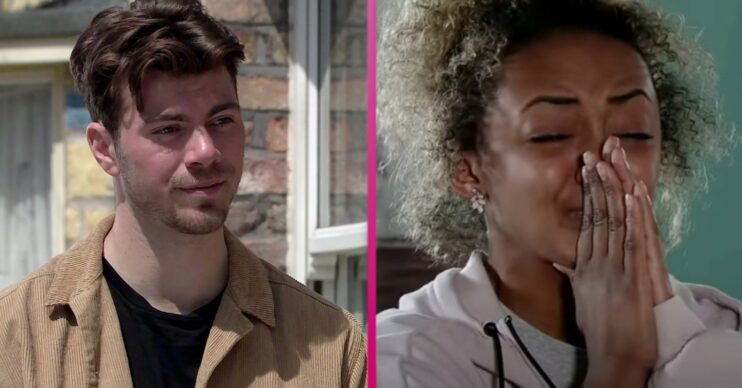 Coronation Street spoilers for next week reveal Curtis tells Emma his secret, but what is it?

In next week’s scenes Emma and Curtis head to the corner shop to set up for Dev’s photoshoot, however Curtis’s phone rings.

Curtis makes out he has a dentist appointment and hurries off, leaving Emma to sort out Dev’s photoshoot.

When Debbie lets slip to Steve that Curtis is in the Bistro with a young girl looking cosy, Steve is concerned.

He sets off to find out what Curtis is up to and goes to the Bistro. He goes up to Curtis and demands to know what’s going on.

Steve assumes Curtis is cheating on Emma and tears a strip off him before leaving.

Curtis tells Emma that it’s over between them and later Steve finds Emma sobbing in the factory kitchen. Steve reckons she’s had a lucky escape.

Steve soon confronts Curtis in the Bistro again and Curtis admits he got it wrong and trusts Steve with his secret.

He makes Steve promise not to tell Emma.

Steve calls into the salon to find Emma in tears. He battles with his conscience, aware of the promise he made to Curtis.

When Curtis reveals to Steve that he’s heading out, Steve offers to go with him.

When Steve and Curtis return to the street, Tracy approaches them and demands answers.

Later Dev tells Curtis that he wants to pull out of the calendar as it could scupper his chances of joining the golf club.

Curtis promises he’ll do his best but fears that it’s too late. Dev brandishes the picture at Curtis and Emma and demands they put a stop to the print run.

Whilst Curtis stresses over the calendar, Emma worries for his health.