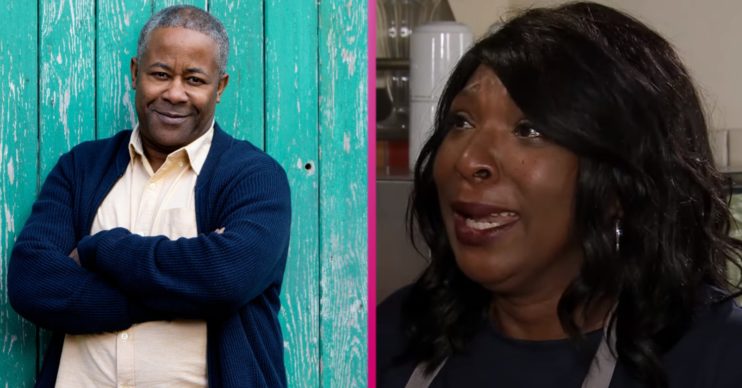 Coronation Street SPOILERS: Coronavirus storyline to kick off next week

Coronation Street will make its first reference to the coronavirus pandemic next week.

In the upcoming Corrie scenes, Ed explains to Abi that Aggie had to get the bus to work because their car won’t start.

Abi tells her neighbour that Aggie can use Kevin’s car until theirs is fixed. She lets him know the neighbourhood are grateful to her for putting herself on the frontline at the hospital. Ed is touched by her kind gesture.

Later in the week, it’s Ed and Aggie’s 30th wedding anniversary. But Ed is disappointed he missed Aggie as she had to set off early to work.

Michael warns his dad that a surprise online party might not be a great idea, but Ed won’t be deterred.

At No.3 Jenny prepares a buffet while Ed blows up balloons for the virtual party. But Aggie rings from the hospital to explain that due to a colleague displaying symptoms of COVID, she has to isolate in a hotel for a while, leaving the builder gutted.

Ed’s miserable about being unable to celebrate his anniversary with Aggie isolating away from her family in a hotel. But Michael and James try to lift his spirits.

Dressed in his best clothes Ed sits down to a virtual anniversary dinner with his wife via video call. Touched by his efforts, they raise a glass to the next 30 years.

Back in March, the UK went into lockdown in order to prevent the spread of coronavirus.

The show will now reference the pandemic and include this storyline, showing a nurse having to isolate from her family.

As spoilers reveal, Aggie is unable to come home, which is what many NHS staff members have had to do.

Can you relate to this storyline?

Are you looking forward to this storyline? Leave us a comment on our Facebook page @EntertainmentDailyFix and let us know what you think of this story.