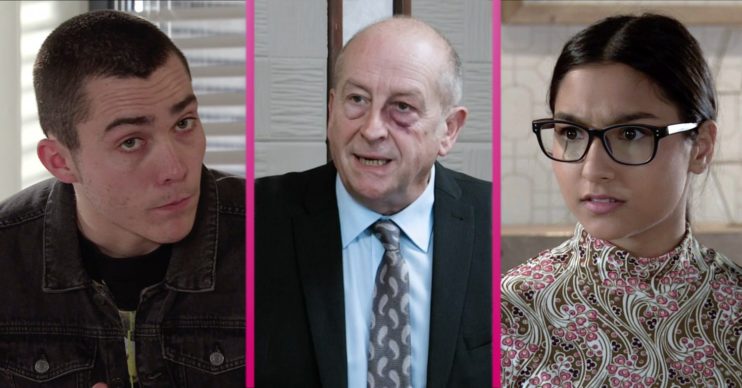 Coronation Street SPOILERS: Corey to become the next Geoff as he manipulates Asha?

Coronation Street spoilers reveal Corey tells Asha that her dad Dev isn’t welcome at their flat. But is he starting to control her?

In tonight’s scenes (Wednesday, April 28) Asha goes to the café and enthuses about her new living arrangements to Nina and Kelly.

Meanwhile Yasmeen learns that Asha is now living with Corey. Having witnessed his behaviour a few months ago, Yasmeen is concerned and warns Dev to keep a close eye on Asha.

Later Dev calls at Asha and Corey’s flat. But as Dev leaves, Corey makes it clear to Asha that her dad isn’t welcome at their place. Is Corey starting to control Asha?

Earlier this year, Yasmeen witnessed Corey being horrible to Asha.

Yasmeen was married to Geoff Metcalfe, who manipulated and abused her. He died in December last year after falling off the roof of No.6.

Read more: Who plays Stefan in Coronation Street? What else has Paul Opacic been in?

After seeing Corey’s cruel behaviour towards Asha, Yasmeen warned her about controlling behaviour and fans were quick to say Corey is another Geoff.

Corey ‘take it off and say sorry’ he’s a young Geoff him. Girls shouldn’t be going near him #Corrie

Corey is turning into another Geoff.#Corrie

What’s next for Corey and Asha?

Next week Corey’s friend Eli comes to pick him up in a stolen car. Asha decides to go with them, getting in the car with Summer and Asha.

They soon stop at a wasteland and get out the beer and turn up the music.

Later Nina and Seb are going for a walk and come across the gang.

Soon Kelly slaps Nina across the face after being egged on by Eli.

As Nina and Seb hurry away the gang start to chase them and the couple find themselves subject to an unprovoked and vicious attack.

Later Aadi calls at Asha’s flat and tells them that someone has beat up Seb and Nina and now they’re in hospital.

Asha reels and Corey pretends to be shocked.

Later Nina wakes up in hospital and says all she can remember seeing Corey and his friends.

Corey swears to his girlfriend that he’s innocent but it would be best if she told police he was with her all evening.