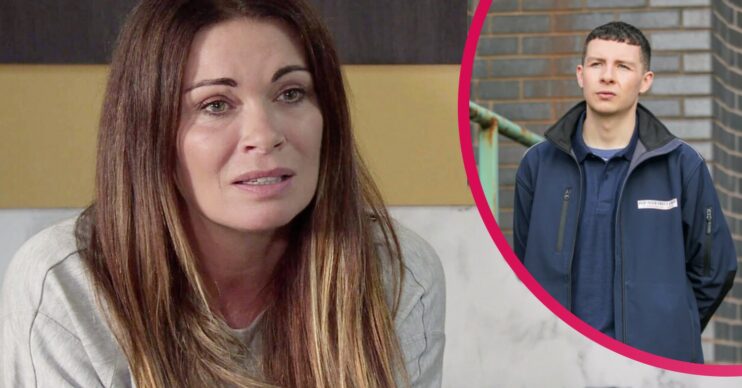 Spoilers say the battle lines a drawn in Coronation Street

Carla Connor could be about to create WAR between the Barlows in Coronation Street, spoilers reveal.

The factory boss, and general cobbles icon, has given a job – after  A LOT of pleading from her niece Amy Barlow – to Jacob Hay (Jack James Ryan).

While this move delights Amy (Elle Mulvaney), it has the exact opposite effect on Carla’s stepson, Simon Barlow (Alex Bain).

Simon takes Carla (Alison King) to task about how she could possibly have hired not only a drug dealer, but his own mortal worst enemy.

It had been Amy’s gall at even asking Carla for a job that impressed her, so she gave him a week’s trial.

And Simon isn’t the only one to be less than happy about the new employee.

When Peter (Chris Gascoyne), Toyah (Georgia Taylor) and Nick (Ben Price) find out the truth, they’re all livid with her too.

Jacob’s action as part of the drug team that recruited Simon, while giving Leanne one of the most terrifying nights of her life, haven’t been forgotten,

Simon is probably the most angry of the Coronation Street residents though, and spoilers say he soon pays Jacob a visit at the factory.

His MO is to humiliate his former bully as much as possible.

Arriving at the factory, Simon wastes no time in telling anyone who’ll listen about Jacob’s list of felonies.

We think they’re in for a long day.

Why is Jacob hated by the Barlows?

Even Carla’s natural poise is shaken, leaving her looking uncomfortable.

Simon is on a roll though and he berates Jacob, telling him he will never forgive him for ruining his life.

Read more: 5 plots to save Carla Connor in Coronation Street

He also sends one last shot, telling Jacob to always watch his back.

Will Carla stand her ground? Jacob won’t be toughest nut she’s had to crack.

Simon soon thinks he’s caught Jacob up to no good already when he spots him hiding something in the memorial garden.

Simon realises he’s been duped as Jacob hands over a packet of custard creams he was hiding.

Jacob goes on to explain how life was so hard working for Harvey.

And now that Harvey’s locked up,  he’s chosen a new path.

This gives Simon food for thought and admires Jacob’s honesty.

But should he though? Really?