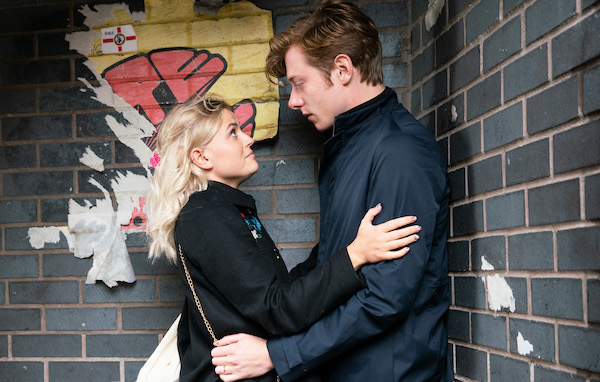 Actress Lucy Fallon is leaving the show next year

Fans of Coronation Street were left disgusted when Bethany Platt and Daniel Osbourne kissed while his wife, Sinead, lay dying.

But it was clear it was more than just a grief-filled comfort kiss, and there is a genuine spark between the pair.

As Daniel struggled to cope with everything, and Sinead’s aunt, Beth, accused the pair of having an affair, he fled to Scotland to get away from it all.

He returned for Sinead’s funeral and has since been spending a lot of time on his own, grieving in his flat.

On Monday he was finally able to watch videos Sinead made for Bertie before she died after getting his stolen laptop back.

It will ultimately form part of Lucy Fallon’s exit story

But as his obsession with the videos grows, in the outside world Bethany is still harbouring feelings for him.

Speaking to ED! and other media at a press event, show producer Iain Macleod explained how this storyline is set to progress.

“We’ve got an interesting next chapter in the Daniel and Bethany story which is about Daniel’s grief,” he said.

“But I think we’ve found a clever way of realistically playing out the next chapter of Daniel’s grief.”

When asked if it was a romance or just a frienship for Bethany and Daniel, Iain responded: “That’s the question really.

“In one of their heads it’s a romance but in the other it’s a lot more complicated.

“But I think we’ve cracked this really interesting grief story that’s not just about Daniel sitting alone in his flat, feeling lonely.”

He went on to confirm it would lead up to Lucy Fallon’s exit in 2020.

“It will ultimately form part of Lucy Fallon’s exit story, without saying too much more about it than that.”

Will Bethany realise Daniel isn’t ready to move on and leave?

Or will he end things, forcing Bethany to depart and mend her broken heart?