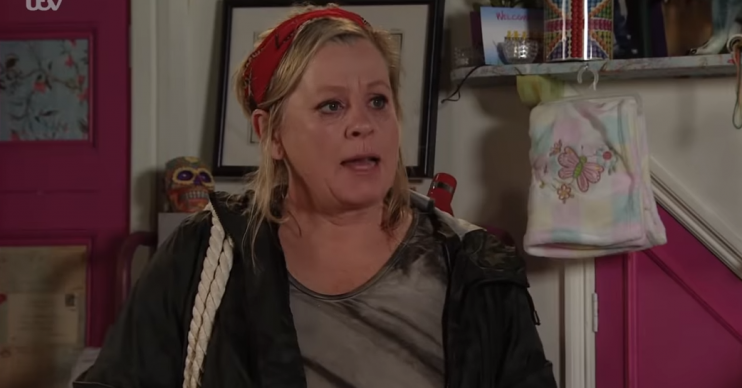 The mother of Gemma and Paul decides it’s time to move on after the family’s months of heartbreak at the hands of her ex-boyfriend, Kel.

But she doesn’t leave before a life-threatening situation hits her family.

With Billy urging Paul to accept that Kel may not ever be punished for his crimes and that it’s time to move on with his life, Paul’s forced to face up to the fact his boyfriend could be right.

Meanwhile Gemma, who’s exhausted from lack of sleep, takes a nap with the quads.

But as she’s sleeping, someone pushes a burning rag through the letterbox and a fire starts.

Chesney arrives home and sees the word ‘paedo’ written on the window and flames flickering.

Seeing the commotion, Abi rushes over from the garage with a fire extinguisher as Gemma appears at the top of the stairs. She realises they’ve had a lucky escape.

Gemma and the babies are taken to the hospital to be checked out and Chesney realises quickly that the attack was aimed at Kel.

Chesney has a go at Paul and Bernie for bringing trouble to their door.

At the hospital, the police tell them they’ll have a car stationed outside of the house 24 hours a day in case of any further attacks.

Chesney and Gemma are horrified their house is a target, meanwhile Bernie and Paul are flooded with guilt.

Gemma’s scared to go home in case of another attack and is chuffed when Freshco offer to put them up in a hotel.

She urges Paul to put what happened with Kel behind him for everyone’s sake, but it looks like Bernie is unable to let it go.

She soon pins a photo of Kel to the dartboard leaving Paul horrified, but Billy quickly removes it.

She says an emotional farewell, is this the last we’ve seen of her?