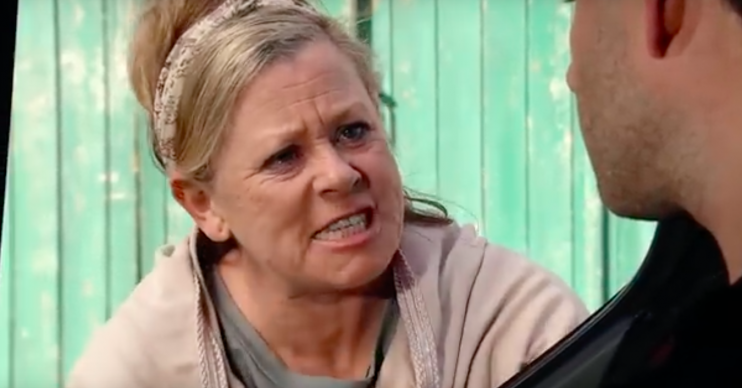 Bernie Winter puts together a new plan to trap Kel Hinchley in next week’s Coronation Street.

Last month Bernie was devastated to learn her boyfriend Kel, who was also the stepfather to her twins Gemma and Paul when they were children, had sexually abused Paul when he was a teenager.

After finding pictures of young boys in Kel’s flat along with stolen items, Bernie went to the police.

Kel was later questioned regarding the burglaries and pictures, but was let go from police custody.

Next week Bernie has an idea to make sure Kel goes down for his crimes.

Bernie begins sending messaging Kel under the false name “Alfie”, pretending to be an underage boy.

She soon suggests that they meet up and hopes he will fall into her trap.

Will Kel fall for it and incriminate himself, or will he realise he’s about to be set up?

Fans of the show know Kel groomed Paul when he was a child.

Although Paul tried to keep what happened to him a secret from Bernie and Gemma, they eventually found out the truth when they went into Kel’s flat.

Paul later told Gemma the full extent of Kel’s abuse and how he took the pictures of him whilst they were on holiday.

This week, Paul fears his case against Kel could be jeopardised when Bernie attacks Kel at the shopping centre he works at.

Will Bernie bring Kel to justice?