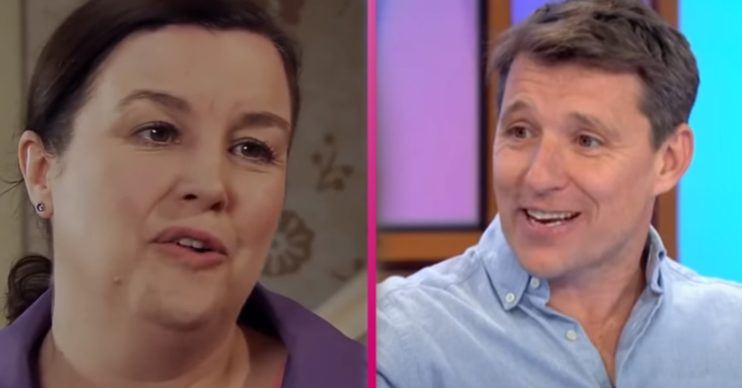 One cobbles resident is a big fan of Ben!

Coronation Street spoilers reveal Ben Shephard, who is a Good Morning Britain presenter, will make a ‘cameo’ on the cobbles next week.

In the upcoming scenes, Mary calls in at the factory to show Sean her latest purchase.

She shows her housemate the fleecy blanket she ordered online and it’s covered of images on Ben Shephard.

Read More: Coronation Street: Where have you seen Leanne’s friend, Mandy, before?

She explains to Sean that Ben is the love of her life, but she is willing to share him.

Hearing this, Sean is left speechless.

Currently in Corrie, the coronavirus has hit the cobbles. And with residents staying inside and social distancing, they are showing what lockdown has been like for a lot of people.

But it hasn’t been all doom and gloom as Mary showed off her musical talents with her balcony singing.

In the scenes, Mary hung out out the upstairs window of No.11 whilst she sang Italian songs. But the game show Tipping Point was also referenced, which is hosted by Ben Shephard.

Whilst she was singing, Sean yelled from inside the house: “Nobody wants to hear your Italian songs at five o’clock in the afternoon. I’m trying to watch tipping point.”

Coronation Street has referenced and had cameos from other TV presenters in the past.

Last year, Lorraine Kelly made an appearance. As the Platts went on a family holiday, Gail noticed the presenter was staying at the same holiday park.

Gail later accidentally shot Lorraine in the leg with a bow and arrow.

Lorraine also appeared in the special A Christmas Corrie back in 2012 as a police officer who got into a tug-of-war with Tina McIntyre.

Will you be watching Corrie next week? Leave us a comment on our Facebook page @EntertainmentDailyFix and let us know what you think of this story.