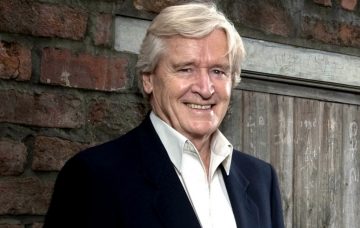 Soap legend Ken Barlow will be gifted a Casanova mask by his family to mark his colourful love life.

The cobbles stalwart, who is portrayed by 87-year-old Bill Roache, will turn 80 on Coronation Street next month, and to celebrate the mammoth milestone his son Peter gives him the prop based on the late Italian womaniser, who is known as one of the most infamous lovers in history.

Carla Connor adds: “We thought, what with you having been around the block a few times, you’ve crammed a lot in your 80 years.”

The quip comes after Ken’s four marriages and nearly 30 lovers in all his years in Weatherfield.

Deirdre was later killed off in July 2015 on her 60th birthday after actress Anne died in January that year aged 60 following a short illness.

What’s more, in real life Bill has previously hinted he has bedded 1,000 women in his lifetime because he “didn’t have any control over [his] sex drive”.

When asked if he had, the cobbles favourite replied: “Well, I’m not denying it.

“There were plenty of girls around. I shouldn’t have done it. I didn’t have any control over my own sex drive.

“Looking back, I didn’t know any better. But what I did find out is it does not bring you happiness and it is not the way to be.

“I had the opportunity, I indulged it and I can tell you this – it’s not worth it. The pain that it caused, and there’s all sorts of dangers.

“To love somebody, and to make love to somebody that you love is the most beautiful thing in the world.”