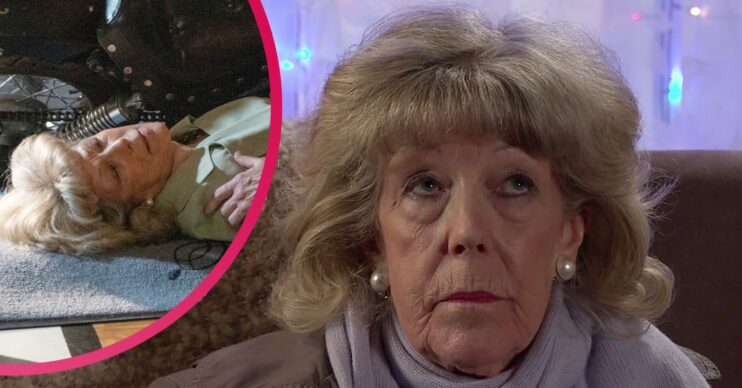 Her boozing continues to cause problems

In Coronation Street spoilers for next week, it isn’t looking good for Audrey after she suffers a worrying accident.

Gail begins searching for her increasingly alcohol-dependent mum after she evades Shona, who agrees to keep an eye on Audrey.

Gail finds her in the Rovers with a bottle of red wine. But at least Audrey and Rita make up, even if Audrey is hitting the booze yet again.

However, as the week progresses and she endures a nasty fall, could time be called on Audrey, rather than her drinking?

Later Audrey is back in the pub. Friends again, Rita pushes her pal in the direction of the barbershop and suggests she should go back to work.

However, this doesn’t sit well with David – especially as Audrey starts drinking on the job.

He sends her home. But as she reaches for her coat, the Thai elephant – which Gail promised to get rid of – sends her sprawling.

But Audrey isn’t having any of it – and she is fuming when Gail brings up her boozing.

But back at the barbershop, she flops into the motorbike on display and it bundles her over.

Audrey’s life hangs in the balance

Shockingly, Audrey lays motionless in the barbershop all night without being missed.

But in a small moment of good fortune, Brian and Elaine hear someone in pain as they pass nearby.

Then Audrey’s son, Stephen Reid, returns – and he breaks down the door to save whoever is inside.

He’s stunned to find out it is his mum, barely conscious.

Meanwhile the Platts are tied up in family meeting about Audrey’s drinking.

The receive advice from Peter, but as they waffle on Brian tells them the ambulance in the street is for Audrey.

A furious Stephen then tears a strip off them all for not being aware about Audrey, leaving Gail feeling guilty.

Will Audrey make it?