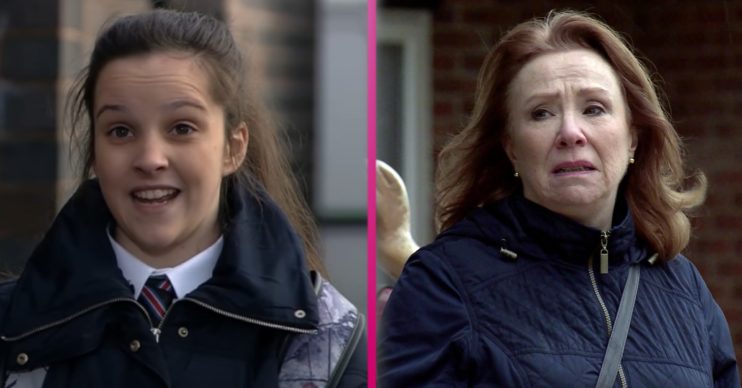 Coronation Street SPOILERS: Amy gets revenge on The Kabin for cruel trolling

Amy is determined to find out who the troll is

Coronation Street spoilers reveal Amy gets her revenge on Brian by having The Kabin vandalised after finding out the troll is someone from the newsagent.

This week, Cathy tries to show Tracy some of her fundraising ideas for Oliver’s fund. But when Tracy gives her the short shrift, Cathy is hurt.

She later leaves some comments on Steve’s online fundraising page suggesting that he and Tracy are syphoning money from Oliver’s fund.

In next week’s scenes Amy is intrigued to go online and read a grovelling apology from Lemon Drop. She enlists Aadi’s help to track the troll down.

After some research, Amy and Aadi discover that Lemon Drop is a newsagent and are quick to assume that Brian is the troll.

Later, Brian’s incensed to find the word ‘troll’ sprayed outside of The Kabin.

Cathy steels herself and explains how in a moment of madness she posted some cruel words about Steve’s fundraising, which she deeply regrets.

But Brian vows to make things right and covers for Cathy. He lets Amy and Tracy believe he was behind the comments and apologises to them.

Brian gets barred from the Rovers

After Brian’s ‘confession’ he assures Cathy that it will soon blow over. Bernie soon suggests to Cathy that they go to the Rovers as it’ll give them a chance to clear the air with Tracy.

But Cathy’s not convinced and when Jenny tells them Brian is barred for making nasty comments online about Steve, Cathy is mortified.

Cathy soon pays Steve a visit and begs him to put an end to the vendetta being waged against them. He promises to have a word with Tracy.

But will she listen to him and will Cathy tell them that it was really her who wrote the hurtful comments?