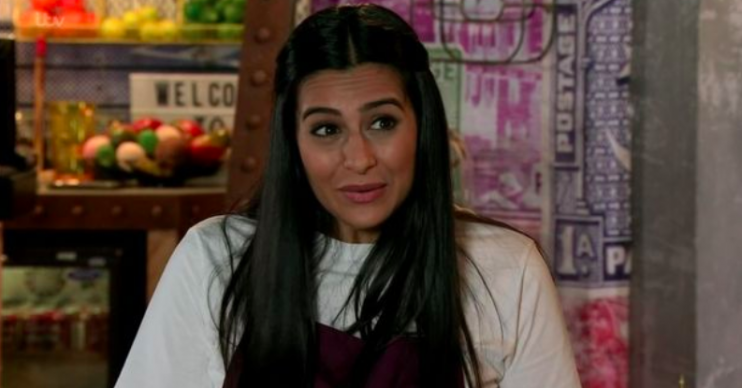 Will Alya manage to rescue her gran?

Next week’s Coronation Street sees Alya Nazir continue to fight to save Yasmeen from Geoff Metcalfe’s terrifying grip… but will her latest plan work?

Yasmeen has been subjected to the most horrific coercive abuse at the hands of her manipulative husband, Geoff, for months.

But as she’s suffered in silence as he controlled her every move, no one realised what was happening behind closed doors.

Thankfully for Yasmeen, her granddaughter Alya has started to realise that there is a reason for her dislike towards Geoff, finally cottoning on to the fact he is controlling Yasmeen’s life.

But, frustratingly for Alya, her grandmother is so far under Geoff’s control that she is reluctant to get the help she so desperately needs.

Having been to the police to report Geoff and find out more about his past, next week sees Alya invite the police officer to her flat in the hope she will be able to talk some sense into Yasmeen.

Ryan makes out that there is a family emergency and drags Yasmeen to the flat where Alya introduces her gran to a police woman who has information about Geoff.

But Yasmeen refuses to listen and rushes out, leaving everyone back at square one.

Later Alya gives Yasmeen the police woman’s card and begs her to get in touch, but Yasmeen is determined to bury her head in the sand when it comes to Geoff’s dark past.

As Alya frets about Yasmeen, she is surprised to learn that her brother Zeedan is getting married but hasn’t invited any of their family.

Ryan comes up with a plan, and realising this is the perfect way to get Yasmeen away from Geoff, Ryan urges Alya to call Zeedan and tell him they’re coming to the wedding whether he likes it or not.

The pair then race over to see Yasmeen, telling her about Zeedan’s wedding plans and that she is coming with them to the celebrations.

Geoff is quick to point out that they can’t all just abandon the restaurant, and Alya takes great pleasure in telling him that it doesn’t matter, because he isn’t on the guest list.

Alya’s triumphant moment leaves Geoff seething and he soon comes up with a plan to get his revenge.

Calling Alya back to No.6 later that day he then gets his own back by announcing to her that he is coming to the wedding and has even booked a hotel… leaving Alya fuming.

How much longer can Geoff keep controlling Yasmeen? And will Alya ever find a way to save her gran?

How do you think Alya can save Yasmeen? Leave us a comment on our Facebook page @EntertainmentDailyFix and let us know what you think!