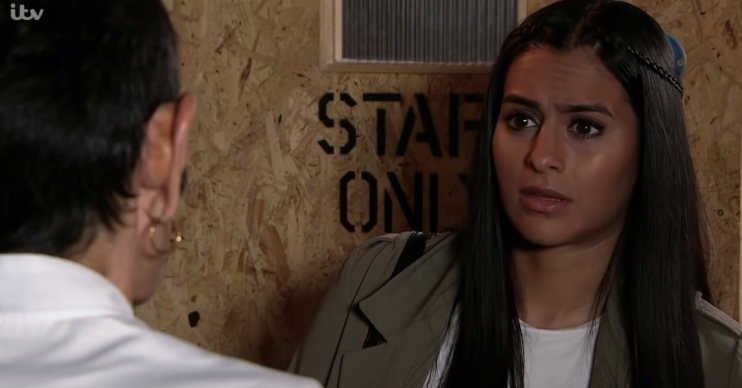 The walls are closing in on Geoff...

Next week’s Coronation Street sees Alya Nazir become the target of Geoff Metcalfe’s horrific abuse. Could this be the moment that his true colours are finally going to be exposed?

For months Yasmeen Nazir has been subjected to horrific, coercive abuse at the hands of husband Geoff, and things only seem to be getting worse by the week.

Most recently Yasmeen found herself locked in a box as he got revenge for his magic trick going wrong.

But even when Geoff’s actions were almost exposed by his son, Tim, it wasn’t enough to make him back off.

But while Tim and Eileen are already suspicious of what is going on behind closed doors at Yasmeen and Geoff’s house, next week sees Alya and Gail start to realise something is amiss, too.

When Alya confides in Yasmeen that working for Ray was the worst mistake she has ever made, Yasmeen offers her her job back at Speed Daal and the pair are thrilled to be working together again.

But of course Geoff isn’t happy about the whole things and sets out to sabotage the new working arrangement.

Deciding to make Alya’s return to Speed Daal a living nightmare, Geoff firstly accuses her of chatting to Yasmeen too much when they should be working.

But when the restaurant then also gets a nasty online review, Geoff shows it to Alya and suggests that it is personally directed at her.

Alya bristles at the suggestion, and when Yasmeen later admits that she has hurt her back moving the sofa at home because Geoff makes her hoover under it every day, Alya’s suspicions of Geoff hit an all time high.

It’s no secret that there’s no love lost between Alya and Geoff, but Geoff isn’t happy about Alya getting involved in his control over Yasmeen and he later vents his frustrations on his wife.

When Yasmeen is late getting Geoff’s tea on the table because she lost track of time while outside with her chickens, Geoff is fuming.

Things only get worse when she serves up a plate of vegetables, pointing out that Geoff didn’t give her enough money to be able to afford meat for their tea as well.

Geoff sees red and his behaviour soon leaves Yasmeen upset, leading to her racing outside to the garden to get away.

But when next door neighbour Gail hears her crying by the chicken coop, the whole thing strikes her as odd and she tells Alya what she has seen.

After the nightmare day she has had with Geoff, Alya is already suspicious that something is seriously wrong between Yasmeen and Geoff, and this latest news leaves her deeply troubled.

But with Alya and Gail now both on to him, how much longer will Geoff be able to keep his abuse a secret?

Who do you think will be the first to work out what Geoff has been doing to Yasmeen? Leave us a comment on our Facebook page @EntertainmentDailyFix and let us know what you think!