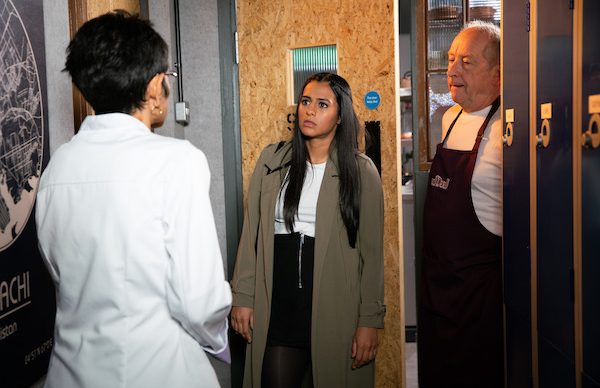 Geoff wants to be a part of Speed Daal

In a preview for tonight’s episode Alya is upset that her brother Zeedan has agreed to sell his share of Speed Daal to Yasmeen, making Geoff a partner in the business.

As Ayla confronts her gran, she says she’s not happy that Yasmeen went behind her back.

While Yasmeen insists it’s Zeedan’s share they want to buy, she then quietly says that she and Geoff are the ones putting all the hours in.

Yasmeen tells Alya she wants Geoff’s contribution recognised and for him to be an official part of the business.

Alya starts to question whether Geoff will be paying for any part of the share and he’s quick to butt in saying he’s no scrounger and will contribute.

Yasmeen reassures Alya that nothing changes the fact that she’s the boss, but the businesswoman warns her gran that it will all end in tears.

Viewers know that Yasmeen is a victim of Geoff’s coercive control.

Alya became suspicious of her gran’s partner a couple of months ago when precious items went missing from their home and she saw Geoff with one of the stolen necklaces.

However, it was revealed later that Geoff HAD stolen Yasmeen’s belongings, which included a framed photo of her late son Kal and a bracelet from her wedding day.

Read More: Where have you seen the actress who plays Coronation Street’s Marion Logan before?

He also set up a secret camera in her house to spy on her when they had split.

Alya became suspicious once again when something Geoff had supposedly been given by the doctor, looked like it had been printed off the internet.