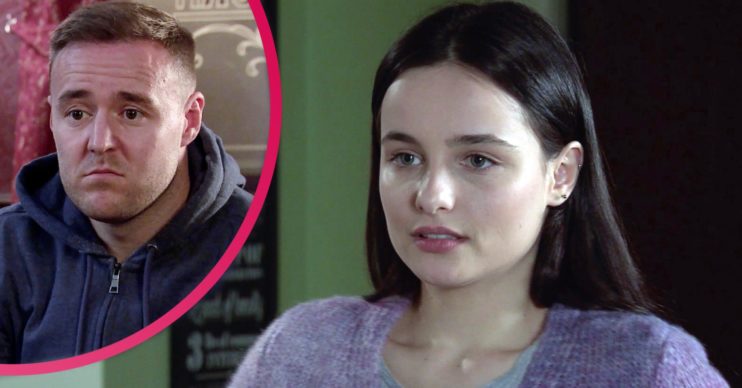 Coronation Street spoilers reveal Tyrone asks Alina to move away. But will she agree?

Over the last few weeks Tyrone and Alina have grown closer. Last week she confessed her feelings for him and they ended up sharing a kiss.

However, Tyrone told his fiancée Fiz about the kiss and she was furious.

In next week’s scenes Alina reveals she’s setting up a pop-up beautician’s in the salon. Maria seizes the chance to get her alone and books a consultation.

Knowing her friendship with Tyrone and Fiz, Alina’s unnerved.

Meanwhile Tyrone and Fiz meet for lunch, but the atmosphere is more tense than ever. Tyrone tells Fiz that if they’re going to have any future together, she has to forgive him, but it’s up to her.

Fiz confides in Maria how Tyrone and Alina shared a kiss and she can’t get it out of her head.

Having reached a decision, Fiz assures Tyrone that she does them to work things out, but there’s something he needs to do first.

Tyrone later goes to see Alina and tells her for the sake of her family, she needs to move away. But how will Alina react?

Will she really leave Weatherfield?

Jennie McAlpine appeared on Lorraine Wednesday (March 24) to talk about the storyline and she revealed there are some “heart-breaking” scenes coming up.

Speaking about people forgiving Tyrone, Jennie told Lorraine Kelly, she said: “I [Fiz] am quite angry for the next couple of weeks. Yeah Fiz doesn’t quite forgive the puppy dog eyes.

“He has really put a real sledgehammer in the whole of their family so it really ripples out to all of us and obviously our kids.

“We have some really lovely scenes that are coming up that are a bit sort of heart-breaking.”