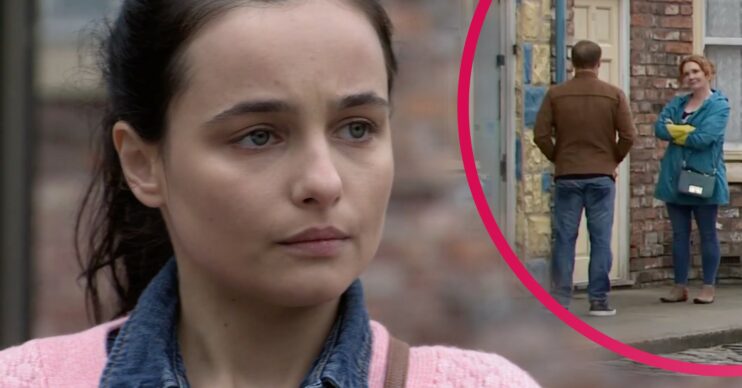 Alina has no idea what Tyrone's going through

Alina Pop will be left devastated next week on Coronation Street when she catches Tyrone Dobbs sneaking around with ex Fiz Stape, new spoilers revealed.

And, next week, when she goes to buy a test, Tyrone disappears and she’s left alone.

Coronation Street SPOILERS: So what’s happening with Tyrone and Fiz?

As she returns home, Alina spots him looking very cosy with ex Fiz and their daughters.

However, viewers know that Tyrone has been dealt a shock with his abusive ex-wife Kirsty Soames dying.

She is the biological mum of Tyrone’s daughter Ruby and she was violently abusive towards Tyrone during their relationship.

Kirsty was sent to prison for her abuse – after failing to frame Tyrone as her abuser.

Last night (June 25), Tyrone was left shaken by the news and he reached out to Fiz for help.

So what happened to Kirsty?

He added: “She was found in her flat by a neighbour – they called the police. They’d been trying to get into contact with me for a while.

“She had an aneurysm. Her mum’s dead and nobody can find her dad – it’s why the police traced me.

“The local authority want me to put her affairs in order – there’s nobody else to do it.”

But it was his worries about telling Ruby that saw Fiz offering to help him.

“How am I going to tell her? Kirsty wasn’t her proper mum – you’re her mum, her real mum. But Kirsty was her biological mum – that means something.”

Next week Fiz steps in and tries to help Tyrone break the news to Ruby.

However, he doesn’t tell Alina and so when she sees him with Fiz she’s completely devastated.

Will they be able to get through it?