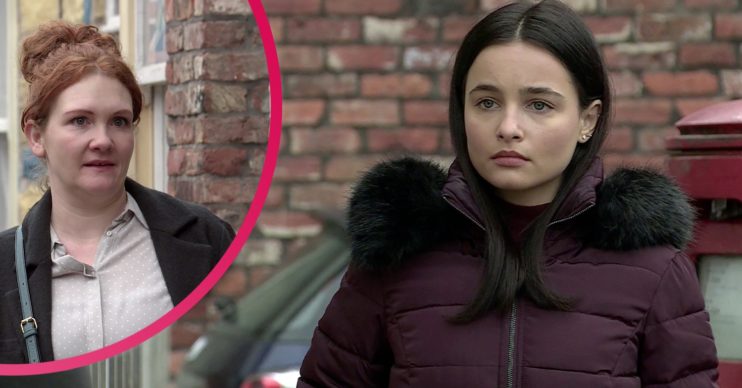 Earlier this week, Tyrone told Fiz that he and Alina shared a kiss and she was left devastated.

However Tyrone assured her that she and the girls are his world.

In tonight’s scenes Fiz confronts Alina and tells her she knows all about their moment and if she knows what’s good for her, she’ll stay well away from Tyrone in the future.

Shaken and upset, Alina tears a strip off Tyrone for telling Fiz about their kiss and orders him to keep away from her from now on. Tyrone is left in turmoil.

Later, Fiz reluctantly meets Tyrone in Speed Daal, but when Sally makes a dig about Tyrone and Alina, she hurries out, mortified.

Speaking about the confrontation, actress Jennie McAlpine revealed Fiz tells Tyrone she won’t go after Alina. However she soon ends up confronting her in Roy’s rolls.

Jennie told Entertainment Daily and other media: “Tyrone says ‘forgive me, my brain went funny and lets try and make this work.’

“He says: ‘you won’t say anything?’ and she says ‘no definitely no’, but I literally go out the front door and see her in the corner shop and say ‘oi you!’

“We go to Roy’s Rolls for the neutral ground. Fiz feels comfy in Roy’s Rolls and we have a chat about it.”

Jennie continued: “When I say chat, it’s more of a threatening monologue from Fiz. She thinks if that doesn’t work then maybe she’s frightened her off a bit.

Read more: Beverley Callard has been ’emotionally bullied’ into having a facelift to prolong career

“She does run away in tears. And I don’t know, it’s the only thing Fiz has got really.

“She thinks ‘I’ll tell her to stay away from him. I don’t know what else I can do’, because we all live on the street so that’s all she has.”