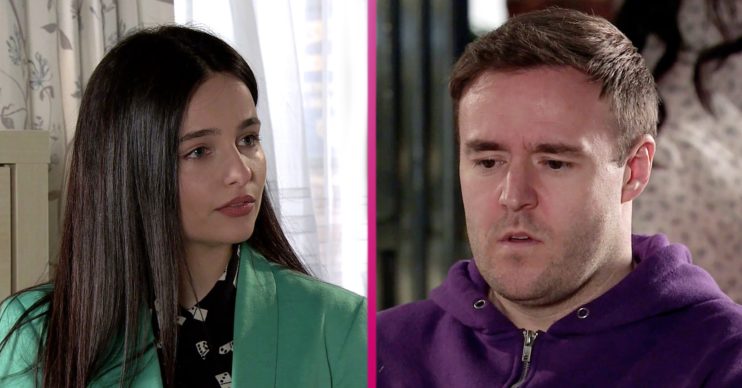 Coronation Street SPOILERS: Alina and Tyrone take the next step in their relationship

How will Fiz react to the news?

Coronation Street spoilers reveal Alina and Tyrone take the next step in their relationship and plan to buy the salon flat together.

Recently Tyrone left his fiancée Fiz as he’s love with Alina. Tyrone has been staying with Alina in the salon flat, where she lives with Emma.

This week, Emma and Alina were left devastated when they found out their housemate and ex-boyfriend Seb was killed in an attack.

In next week’s scenes Alina confides in Tyrone that she’s not ready to look for a new flat as the salon flat reminds her of Seb and she finds it comforting.

Tyrone is understanding, knowing how close Seb and Alina were.

But when Debbie announces to Tyrone that she’s selling the salon flat and wants them to move out, Tyrone wonders how he’s going to break the news to Alina.

Debbie offers Tyrone first refusal on the salon flat if he wants to buy it. Tyrone plucks up the courage to ask Kevin if he can borrow £8k for a deposit on the flat.

What will Kevin say?

Later Alina reveals her and Tyrone’s plan to buy the flat to Emma. But she assures her that she’s welcome to stay as long as she likes.

Emma tells Fiz about Tyrone and Alina’s plans to buy the salon flat. How will she react to the news?

Fiz is still living at No.9 Coronation Street with her and Tyrone’s daughters, Hope and Ruby.

She was furious when she spotted Tyrone spending time with Alina and the girls.

However she agreed to let him see them again after hearing about Seb’s death. But how will she take their latest news?